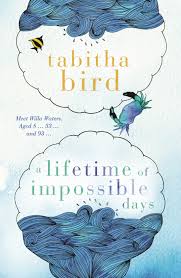 Every so often, a book comes along that reaffirms the glory and beauty of life. Tabitha Bird has gifted us this wonder in the pages of her debut novel, A Lifetime of Impossible Days (Penguin Random House 2019). This story is a fantastical mix of literary fiction and magical realism. As readers, we are asked to suspend our disbelief from the very first pages as we embark on a journey that is both deeply rooted in trauma but also firmly attached to the healing power of love, truth and self-forgiveness. Part of the dedication reads: ‘… to anyone with wounds; may you have the ocean. They say salt heals.’ And this sets us up for what is indeed a troubling exploration of guilt, abuse and regret, but which is ultimately lifted up by hope, imagination, adventure and atonement.

In this book, we meet Willa Waters at three stages of her life: aged eight (‘Super Gumboots Willa’), aged 33 (‘Middle Willa’) and aged 93 (‘Silver Willa’). The chapters are narrated in first person and alternate between 1965 as told by Super Gumboots Willa, 1990 described by Willa as a young mother with two children, and 2050 by an aging Willa who at first seems to be suffering from senile dementia, although our view of this changes and distorts as the story progresses.

At one point, Willa’s own Grammy tells her: ‘I think I’m still making myself up. We’re all stories, Willa. How else do you tell a story if you don’t make it up? Sometimes, when everything else seems lost, you simply have to keep inventing.’

On the first of the impossible days of the title, eight-year-old Willa receives a box containing a jar of water with the instructions: ‘One ocean: plant in the backyard.’ And so she does, creating a mysterious ocean-garden that allows her to slip forwards in time to visit her future selves. Could it be that the significant trauma of her childhood has untethered her from reality? Is her mind reacting to stress by the creation of an imaginary world? Or is it really happening? As readers, we are never quite sure. Tabitha Bird shifts so seamlessly from the real to the imagined, from entrapment to escape, that it is only a few chapters in to the story before we, too, are moving freely between what actually happened to what might have happened, from the believability of truth to the impossibility of fiction.

As a young mother struggling to deal with childhood trauma never adequately dealt with (and a sister that she feels she failed to save), 33-year-old Willa has another impossible day and is about to make a decision that will have even more tragic consequences for her past and future selves. And on an impossible day in 2050, colourful, gum-boot wearing, jam-drop eating Willa is facing the loss of her memory and her imminent move to a nursing home by her estranged family, yet she has a feeling that somewhere, underneath the pain and the forgetting, she knows something important that will change the course of her life, if only she can warn her past selves.

Each of the Willas speaks in her own distinct voice, although the character of Willa beats strongly throughout, so that we recognise her as the same person, despite her differing ages and circumstances. The vulnerability and innocence of young Willa is as endearing as the struggle of adult Willa to make difficult choices, as is the frustration of Silver Willa as she tries to remember what is important, to cope with the inequities of age and the burden of an impossible life.

This is a novel of childlike wonder and optimism, run through with a dark seam of secrets. It is a book to be read by completely letting go – like riding a pushbike downhill with no hands, the wind streaming through your hair and the thrill of adventure beside you. A book in which to completely immerse yourself, allowing all your preconceived ideas and beliefs to float away as you enter a parallel universe that is simultaneously impossible to conceptualise but also feels authentic and true. It is a metaphorical and allegorical tale about growing up, becoming brave and believing in yourself. The book’s darker themes of abuse and the repercussions that untreated or unaddressed trauma can have on a person’s life are explored with great sensitivity and a whimsical flare. The story also navigates growing older, the complicated ties of family loyalties, the reverberations of past mistakes, the idealistic imagination of childhood and perhaps most of all, the vital importance of being kind to yourself: forgiving your past child self, understanding your conflicted adult self, and being gentle and generous to your older self. This is a book of impossible days that become possible, of troubled lives that become healed, and of imagined stories that become reality.