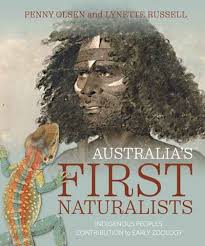 Despite the well-documented legacies of colonial naturalists, in recent years there has finally been increased and well-deserved recognition of the role of Australia’s Indigenous people in collecting, naming, cataloguing and sharing their understanding of this country’s native fauna. While history generally records ‘famous scientists’ from other countries as being responsible for identifying species, often naming them after themselves, it has become obvious that not only did this country’s first people have intricate knowledge of native fauna and its habitats and habits, but they provided an invaluable contribution to the development of western civilisation’s study of zoology. Aboriginal people knew Australia’s animals intimately for tens of thousands of years, knowledge that was passed down through the generations through song, dance, paintings and first-hand experience.

Australia’s First Naturalists (National Library of Australia 2019), by Penny Olsen and Lynette Russell, is a well-researched and beautifully presented book that would look equally at home on a coffee table or in a scientific library, and would make a special gift for anyone interested in the history of Australian zoology and the extensive contribution of Indigenous Australians in shaping this knowledge. As author Bruce Pascoe describes the extensive agricultural practices of Indigenous people in his book Dark Emu, this book turns on its head the idea that Australian fauna was only ‘discovered’ (or catalogued) since the arrival of white people to this country, but instead describes not only the rich history of zoological knowledge before that time, but also the important role played by Aboriginal people in creating the vast store of ‘officially recorded’ knowledge since the late 1700’s, through the collection and collation of species, and through sharing their knowledge (with the colonisers) of animals’ habitats, diet, reproduction and unique characteristics. It also explains the close connection not only between Indigenous people and country, but also their spiritual ties with native animals.
The book is divided into five chapters. The first depicts Indigenous knowledge before the arrival of colonial naturalists; chapters two, three and four demonstrate the assistance or partnerships between the newcomers and Indigenous people as they embarked on their search for details about this ‘new, undiscovered world’, and these sections also highlight noteworthy individuals and particular expeditions. The last chapter discusses the modern impact and role of Indigenous people as skilled and invested custodians of the land, making use of their age-old knowledge of flora, fauna, the use of fire, and the seasons and weather to develop sustainable contemporary wildlife procedures and guidelines.
Printed on thick, glossy paper, the book contains reproductions of early drawings and paintings, and later, photographs, on almost every page, and includes an extensive index and notes section. And while the writing is precise and scientific, providing essential research notes, the text is written in an easy-to-read, informative and entertaining style, which makes it much more than a scientific resource. It is also the story of Australia’s first naturalists provided through fascinating anecdotal evidence.
The two saddest things – or the information that shocked me the most – while reading this book was firstly the sheer, momentous number of animals that were killed in the name of science (and which, of course, subsequently led to the extinction of so many), and secondly, the absolute lack of recognition for so many of the often unnamed Aboriginal people who did at least the same tasks of the colonialists, and frequently did the lion’s share of the work, but without the recognition in official records or documentation. At least this book goes some way to redressing that imbalance.