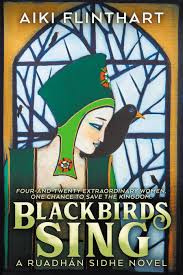 Blackbirds Sing (Cat Press 2019) is a rather unusual novel by Aiki Flinthart. In a collection of linked short stories that features 24 different women of all ages and classes, the novel addresses the powerlessness of women and the many dangers to them of 500 years ago, but also highlights their persistence, their courage and their united desire to maintain personal sovereignty despite all odds being against them.

The book is loosely based on the children’s nursery rhyme ‘Four and Twenty Blackbirds Baked in a Pie’, in the year 1486. The reign of King Henry VII is threatened by York loyalists. The opening and closing chapters are narrated by a 432-year-old Travelling Minstrel, and the 22 chapters in between are narrated variously by midwives, maids-in-waiting, healers, tradeswomen, thieves, musicians, prostitutes, servants, mistresses, doctors, assassins and nuns, ranging in age from pre-puberty to old age, and ranging in class from nobility to the poorest of the poor. Each tells a unique story of their own experience and each of their stories combines with the others to give a layered multi-view of society, all that was going on at the time, and the role these women played in protecting their King.

Flinthart is clearly obsessed with this time period and has included a lot of research and historical detail. There were probably too many characters for me to fully engage with any particular women with empathy, but overall the story paints a broad brushstroke of what women’s lives were like at that time, whether they were poor or rich – the expectations upon them, the restrictions around what they could and couldn’t do, the secretive plans they hatched in order to carry on their lives, the ever-present danger of being called witches, the implicit threat of childbirth as well as illnesses, the dangers of war and civil unrest, the power wielded over them by men, the bonds forged between women as they navigated their lives and the griefs and losses they endured along the way. There is plenty of romance and desire, and much to appeal to readers who like to immerse themselves in this historical period.