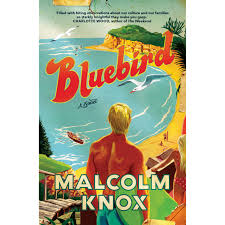 Bluebird (Allen and Unwin 2020), the new novel by Australian author Malcolm Knox, is a sharp, keenly observed, brilliantly funny tour-de-force that unpacks masculinity and the complicated relationships of families through the examination of long-held secrets, complex loyalties and the shifting dynamics of decades-long friendships and bitter enmities.

The Lodge is a ramshackle, decaying once-grand manor of a house that sits precariously on top of the cliff overlooking the iconic and beautiful Bluebird Beach. Clinging stubbornly to its space, while its neighbours are all redeveloped and gentrified, The Lodge has become a faux community centre for those who live in it and the many more who treat it as a second home, a club house, an escape, a right of passage, a sacred and unassailable anchor of everything the area of Bluebird used to represent.

To Gordon Grimes, the house represents a part of himself, a legacy of his family and the last connection to someone he lost long ago in traumatic circumstances. But Gordon is drowning in debt and no amount of band-aid solutions can fix The Lodge’s terminal problems. Gordon’s almost ex-wife Kelly has also returned to live at The Lodge, even while still trying to leave her husband. Their son Ben, with too many of his own problems and issues, is nevertheless doing everything he can to save the house and his father. And Gordon’s god-daughter Lou is also a permanent fixture, the only one who can make a decent coffee. The family matriarch, Leonie, is playing her own long end game, and keeping her family members trapped in the house is all part of her plan. And Gordon’s parents, Ron and Norma, are deeply flawed characters who never cease to cause trouble, but who have had their own share of grief.

As Gordon becomes increasingly desperate to hold onto The Lodge, a huge cast of characters walk on and off stage: his old surfing buddies Snake, Red Cap, Firie Sam (who has his own complicated history with Gordon), Tonsure Man, Cnut, Japan Ned, Dog (who’d had an affair with Gordon’s wife Kelly), and of course there’s a Macca and a Chook and ‘and an interchangeable posse of Maccalikes and Chookalikes’. All past their prime, all fixated on the next wave, all having seemingly endless time to hang around The Lodge like it’s their personal club.

Gordon is a man for whom we feel immense empathy and sympathy. We can relate to his bumbling attempts to keep fiddling even while the ship is going down; we can understand his tangled messes of relations with those in his life; we can see where he’s going wrong, and how, but it’s like watching a train derailing in slow motion – there is nothing we can do about it. He is fundamentally flawed, embarrassed, embarrassing, inadequate, self-loathing, weak, inept and cowardly, but he is also an underdog, the loser we want to cheer on, the quiet acceptor of insults and injuries, a man that we hope will one day rise up and strike back.

The characterisations in this novel are witty, cruel, frank and disarmingly recognisable. These are flawed characters who fail themselves and others at every turn; sometimes people who mean well but cause endless harm and chaos, and sometimes people who absolutely plan every bit of destruction and hate and ignominy and jealousy they create. Knox describes them with dark accuracy and cunning, his words painting pictures that are impossible to forget. The dialogue is authentic and caustic.

The plot is every bit as complex and thorny as the characters. The linking thread is The Lodge: what is to become of it, how it is falling apart, whether it can be saved. But there are so many other subplots going on in this narrative: subterfuge, ambition, thwarted desire, romance, greed, manipulation, historical secrets, divided loyalties, cherished friendships, blood ties that are thicker than water and ties between mates that are thicker still. I’m sure this novel will be touted as a great Australian classic, a familiar landscape of place and community that will be recognised and embraced.

The dichotomy of the new replacing the old and the young displacing the established is captured in every page, as the nailed-down residents of Bluebird are confronted by redevelopments, progress, baristas with accents and man-buns, youngsters with obscene amounts of renovation cash, hipsters who think they own the place and youngsters who claim the beach and the surf without a thought to the hierarchy and the established pecking order.

This is a book that will totally appeal to male readers, with its self-deprecating humour and pitch-perfect characters, (and also an abundance of surfing and cricket…) but its sensitivity and emotional baggage, its depth and thought-provoking pokes at human nature will appeal to all readers who enjoy a rich, complicated, multi-layered story with many facets waiting to be polished. It is savage and then tender, hilarious and then heart-breaking. It’s about myths, getting older, becoming irrelevant, growing up, being brave, sacrifice, dying, making mistakes, forgiveness, longing, irascibility, corruption, compassion, regret, redemption, lies and truths.

Knox’s previous book The Wonder Lover gained a lot of critical acclaim, but I enjoyed this one much more. This is a book that speaks to modern society and those of us who play a part in it. It is a novel that captures the Australian beachside community and its many caricatured individuals; a story that cleverly reveals long-held secrets and accidental conspiracies. The many threads of resolution are delivered with an inevitability that feels resoundingly real.