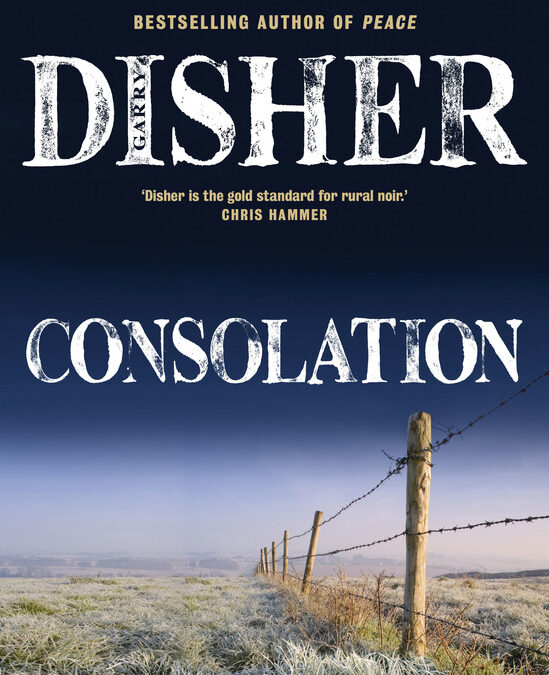 Garry Disher is known as one of the patriarchs of Australian rural crime fiction and his latest novel Consolation (Text 2020) cements this position. His flawed but popular and likeable character, Constable Paul Hirschhausen (or ‘Hirsch’) is a relatable protagonist written with depth and nuance.

He’s ‘only’ a constable in a small town – not a high-flying detective as in many other crime novels – and this lack of agency, his role as a small-town cop who spends most of his time doing welfare checks and issuing speeding fines, and his messy personal life, all make him an endearing and engaging man.

Consolation is the third book to feature Hirsch, after Bitter Wash Road and Peace. I’ve only read the second and third, but each stands alone, although as with all books in a series, you probably get more out of reading them all, in order. In this book, Hirsch is investigating a snowdropper – I’d never heard the term, but it’s someone stealing women’s underwear from clotheslines. (Sidenote: Why does men’s underwear never get stolen?!) It may be a small crime but Hirsch is aware that it could escalate and lead to worse incidents. And then he receives two frantic calls – one about a father who is on an angry rampage at the local primary school, and another from a teacher who is worried about a child she thinks might be in danger or neglected at home. Hirsch is used to the pressures of outback life, especially financial stress and families dealing with isolation and reduced circumstances. But when the killing starts, things really begin to get serious.

As always, Disher’s writing is tense, tight, taut, intricately plotted and rich in description, particularly the depiction of the Aussie outback. His characters are sharply drawn. As with many crime novels, there are a lot of characters for the reader to keep their eye on – possible victims, suspects or witnesses – and every one in this book feels real and authentic. The deaths are always surprising; someone you thought for sure would still be around at the end of the book is abruptly, unexpectedly and cruelly killed.

Hirsch’s relationship with his partner Wendy, and her daughter Katie, is a lovely, soft, light space between the vicious crime scenes, and allows the reader to take a breath and gain some insight into Hirsch’s gentle side.

If you love rural noir and you’ve never read Garry Disher, you are missing out. He’s up there with Chris Hammer and Jane Harper. I’d love to see Hirsch in a TV mini-series.