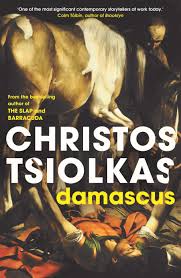 Christos Tsiolkas is heralded as one of Australia’s greatest contemporary storytellers. His works are meticulously researched, his characters carefully crafted and his themes are considered and profound. His latest novel Damascus (Allen and Unwin 2019) is on many levels a triumph of literary achievement: a re-imagined, epic and powerful retelling of the events surrounding the establishment of the Christian church.

The narrative is based on the letters of St Paul and focuses on Paul (Saul) and several other characters (Lydia, Timothy, Thomas) who lived during and/or generations after Paul’s lifetime. The broad themes of the novel are belief, religion, class, privilege, desire, family, love, exile, friendship, doubt, faith, betrayal and sacrifice.

Tsiolkas is a serious, intellectual writer who is unafraid to tackle the big issues facing humanity; his writing is urgent and passionate, detailed, unflinching and grave. While I recognise all of those characteristics, however, I was unable to warm to this book. I can respect it for its historical reflections and dissections, I can applaud it for its ambitious scope, but I did not find it deeply affecting as a story and I found it difficult to emotionally connect with the characters. I almost feel like this is more of a factional account of how history might have been; a sort of humanisation of the dry historical facts (or conjecture). The jumping backwards and forwards in time, and the enormous cast of characters, also left me not confused, exactly, but more adrift. For me, and this is only my opinion, it is impressive but not enjoyable; majestic but not engaging. No doubt it will impress others with a much deeper meaning and significance.

It is not often I include a long list of words in my review but I felt compelled to do so with this book. It is not for the faint-hearted and readers should be given far warning of its relentless trauma.

Tsiolkas has spoken of his long years of research and attachment to this story, and about the conflicting questions it explores about Christianity, homosexuality, estrangement, reconciliation and a reckoning of what might have been and what it all means. He says: ‘…even though I am no longer a believer in the Christian myths, I discovered I am still committed to and challenged by the injunctions of this prophet. To love one’s neighbour, to turn the other cheek, and to understand that none of us have the right to throw the first stone all remain fundamental to my beliefs.’ Throughout the novel, the mantra of ‘the first will be last and the last will be first’ is repeated in variations.

I am quite torn in reviewing this novel. While I didn’t personally like or enjoy it, and in fact found it confronting, gratuitous and uncomfortable, I can simultaneously admire the craftsmanship of the writing and the constant seeking of profound and important themes.