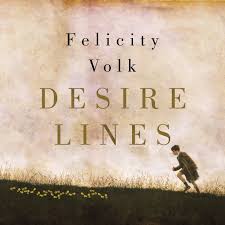 Desire Lines (Hachette 2020) is an epic, sweeping drama spanning more than half a century by author Felicity Volk. Featuring a lifelong relationship between Paddy O’Connor and Evie Waddell, this is a love story that transcends time, place and circumstances. In beautiful, descriptive language, Volk depicts tender romantic unions, traumatic childhoods, the complexities of family dynamics, and the sharp pull of desire, all set against the war, politics and society of Australia from 1952 to 2012.

The first words of the book are Evie’s: ‘Are you still a liar?’, which immediately plunge us into the mystery of who Evie is referring to, and what has happened in her past. The narrative opens with Evie in her sixties as she travels to the frozen Arctic Circle as part of a contingent contributing to a Seed Vault housing precious seeds from all over the world in a frozen mountain cave; a Noah’s Ark-type insurance against catastrophe.

Then the story jumps backwards in time and we are introduced to Paddy, aged seven, living in poverty with his family in London in 1952. His gambling, philandering and violent father is the antithesis of his loving mother, and with his new brother Russ only three months old, Paddy and his mother are at the mercy of his father’s temper. When he forces Paddy to make a Sophie’s Choice decision, Paddy is separated from them all and placed in an orphanage, and eventually sent to Australia as one of the Stolen Children. This section of the book is tragic and traumatic, and the cruel treatment metered out to Paddy is difficult to read. He is a small boy, alone, completely at the mercy of institutions and the people who have power over him. Whatever friendships or achievements he does make are crushed by the brutality of the time. It is in this highly detailed account of Paddy’s younger years that we see the environment that shapes him, physically and emotionally, into the adult that he becomes, with all of his issues relating to trust, boundaries, loyalty and security.

Meanwhile, Evie’s story is told in tandem. With strong links to her grandmother, and her favourite place being the farm and antique shop her grandma and her husband run in the country of the Blue Mountains, Evie plans her life but realises that her own dreams are different to those of her parents. When she and Paddy meet as teenagers by chance at a country market, their desire is immediate and compelling. But a series of misunderstandings and miscommunications lay various obstacles in their path, and they spend the next fifty years circling in and out of each other’s orbit, with husbands, wives and children determining their relationship. Both are wary of commitment, but especially Paddy, who has a deep-seated need not to rely on anyone in case they let him down. As the story moves from the fifties and sixties into the seventies and beyond, the couple’s impossible to ignore – but impossible to achieve – love story becomes more intricate, more interwoven with complications and obstacles, more tragic. We yearn with the young lovers to find each other; as they get older, we yearn that they will find each other again, or keep hold of each other, or reunite, or make amends, or trust enough to give in to their feelings. As their lives move inexorably onwards, weaving in and out of each other’s stories, we come to feel deeply for both Paddy and Evie, and empathise with them both because of their tragic histories, their sliding doors moments, the strength of their love. This is a story about the lies we tell ourselves in order to survive, and the lies we tell those we love, either to keep them close or to keep them away.

The novel covers architecture of all kinds and features at the centre the building of the new Houses of Parliament and High Court of Australia in the embryonic city of Canberra. It also includes landscape architecture and environmental themes, with the practices of Indigenous Australians threaded throughout the story – their land management regimes, their agriculture, their plant foods, their knowledge.

Desire Lines is an historical romance with depth and nuance, and with compelling characters that will stay with you. And if you’re after a (belated) Mother’s Day present, this would make the perfect gift.