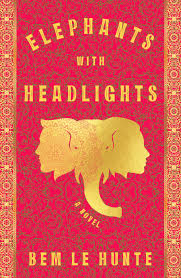 I love books set in India, and Bem Le Hunte’s Elephants with Headlights (Transit Lounge Publishing 2020) is a wonderful explosion of east meets west, tradition versus modernity, familial and societal customs crashing against individual autonomy. In a narrative that traverses the confrontation of a modern Indian family beset by traditional values against the arrival of an Australian woman who threatens to disturb the equilibrium they have carefully structured over decades, the characters all face questions of identity, loyalty and obligation.

Siddarth and his wife Tota are struggling with their children: Savitri, who has refused all the marriageable young men they have introduced and seems set on not marrying anyone; and her brother Neel, who is intent on marrying Aussie Mae, who he met – most unsuitably – on a beach. The generations clash as expectations are met with refusal and obstinacy. The grandmother, Dadi, also resides in the home, and although she is even more traditional in many of her views, she has been progressive in her day, including many years earlier ‘rescuing’ the child Arunji from a life of grinding poverty as a servant, raising him as a brother to Siddarth and encouraging him to become a maths professor. Now the family astrologer, working out auspicious dates and times with the help of birthdates and the stars, Arunji seems to know much more than he often lets on, but he is cursed with the power of whether or not to share this information. When Guruji becomes involved with the family, this 200-year-old guru affects each of them in a unique way. As Savitri, Neel and Mae try to navigate their own desires and ambitions with the expectations and responsibilities of their families, the author introduces a touch of magical realism into the story that feels entirely at home and completely possible in the Indian setting. Mystical and magical elements enter the realm of the everyday, and we do indeed believe that ‘there are more things in heaven and earth … than are dreamt of in your philosophy’.

The author dedicates this book ‘to the women of the world – the eternal flame of the sacred feminine’ and the book explores the transformational role and place of women, feminism, cultural differences in relation to gender, and the hidden power of the ‘domestic’ over the more obvious male dominance. The story is filled with strong women who stand up to the men in their lives, and also stand up to each other, in order to find their place in the world.

The reason I love Indian novels most is that the setting is usually rich and immersive; the smells, sounds, tastes and sights of that country are on display in vivid colour and overwhelmingly evocative scenes. This is no exception. The story is lavish, entertaining and wise, a heady combination of the spiritual and the divine combined with the challenges of modern everyday living. I love the cover, and the title, which refers to elephants being fitted with headlights to avoid collisions as they wander through crowded Indian streets, and the book begins with a fascinating allusion between these creatures and the advent of driverless cars. In a book that questions class, poverty, race, tradition and culture, a memorable cast of characters with conflicting views pulls the reader from one stance to another, as we try to make sense of what is right and wrong, what is destined and what is happenstance, what is real and what is imagined.