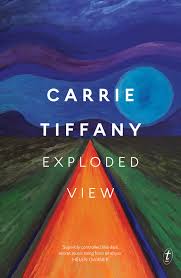 Author Carrie Tiffany was one of the first Australian writers to instil in me a love of writing and an ambition that I could perhaps write myself. Her previous books Mateship with Birds (which won the inaugural Stella Prize) and Everyman’s Rules for Scientific Living are both wonderful examples of a writer who truly loves words and delights in the craft of writing. Her recent novel Exploded View (Text Publishing 2019) is a slim volume narrated from the perspective of a young girl who doesn’t speak (and in fact there is almost no dialogue at all in the book), and recounts with spare and beautiful prose her abusive life and her dreams of escape.

Set in suburbia in the 1970’s, the 12-year-old lives with her brother, her mother and her stepfather, whom she calls father man. Father man is an unregistered mechanic who by day does dodgy vehicle repairs in the shed behind the house, and by night harasses and torments his family with the power he wields. The girl holds dear a tattered Holden workshop manual and uses it to gain precious knowledge about what matters most to father man. The book first introduces us to the girl and her family at their home, then takes us with them as they go on an insufferable road trip – eight days’ driving, three days’ staying at a place none of them enjoys, and eight days’ driving back again, eating at roadhouses and sleeping in the car. The other main aspect of the book’s narrative is the girl’s nocturnal activities – she rebalances the notion of power the only way she knows how, by tampering with father man’s engines and completed repairs, and using her mechanical knowledge (gained from many nights of tinkering with other people’s cars in the dark) to subtly undo his work: a handful of needles, dirt or feathers added, or merely the loosening of screws or the piecing of tubes. She takes the cars for joyrides too, secretive night-time drives, and also quietly breaks into the houses of neighbours when they are out, watching the television or using the bathroom. In this way she wrests some control from a life that is otherwise very much determined by others.
Exploded View is an exquisitely-written book. Not a word is wasted. Every sentence feels real and honest and true. This family is achingly broken and disturbingly unsettling. The hints of abuse are so understated and matter-of-fact – a line here, a word there – that you could almost miss them at first. But gradually the references build and the sinister nature of father man becomes apparent.
There are so many perfect phrases in this book. One of my favourite, which I think sums up the book really well, is this simple sentence: ‘I don’t know what other families are doing, but I know they aren’t doing this.’ The girl realises her life is not normal but she has no idea what normal is, or how she could attain it. She can only make the best of what she has. Her acts of sabotage balance the otherwise lack of agency she has about what happens to her.
Because Exploded View is narrated by a child, the perspective is through the prism of a child, and some of the views she expresses and the comments or thoughts she makes in her head are naïve and sometimes views that we would criticise in an adult (eg her dismissal of the ‘fat woman’ next door). This obliviousness, candour or unsophistication may be uncomfortable for some readers, or be seen merely as childish vulnerability and guilelessness by others.
The title Exploded View refers to the diagrams that depict the working parts of a car or engine, with each part labelled and separated out around the main section. I think it also refers to this family and their life, how each character is separate and apart, and about what it would take to make it whole.