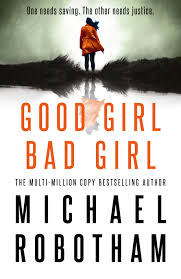 Good Girl Bad Girl (Hachette 2019), the latest psychological thriller from crime writer Michael Robotham, is a fast-paced, tense narrative with an immersive plot filled with leads, tangents, red herrings and sub-plots, and featuring two new characters that are sure to become firm favourites with Robotham’s fans.

Cyrus Haven is a forensic psychologist with a lot of baggage. A tragic event in his past – that led to the loss of almost his entire family – has marked him in ways he is still processing, even as an adult. He is warm and likeable, with a history and backstory shared but not fully unpacked in this novel, and I’m sure we will hear much more about him in subsequent books.

Evie Cormac is a feisty and damaged young woman with an amazing ability to tell when people are lying. Six years earlier, she was found dirty and half-starved, hiding in a secret room in a house where a terrible crime had occurred. She is unable – or unwilling – to say anything about her past; her history, her family – even her real name – all remain a mystery. In and out of foster homes and institutions since being discovered, she is nearing adulthood, but nobody believes she is capable of caring for herself, and in fact most believe she is a danger to herself and / or to others. Evie is a fantastic character – self-contained, challenging and confronting – and I’m sure comparisons will be made with Lisbeth Salander (from The Girl with the Dragon Tattoo).

The third character at the centre of this story is 15-year-old Jodie Sheehan, a schoolgirl and champion figure skater, who has been found murdered. Jodie’s large circle of family and friends, teachers, coaches and associates all become witnesses or suspects as the investigation into her death continues.

When Cyrus is asked to help investigate Jodie’s case, and also to assess Evie and her suitability for release, the circumstances of both girls threaten to disrupt the orderly life he has constructed. Nobody is telling the truth, everybody seems to be lying, and Evie’s ability to tell the difference might save him or might destroy him.

Good Girl, Bad Girl is an absolutely unputdownable thriller. The characters of Evie and Cyrus are well-rounded, interesting and authentic. Although we do learn a lot about each of them during this story, by the end of the book, we feel we have only just scratched the surface. Like the first episode in a TV crime series, the scene has been set and there is so much scope for the development of these two memorable people.

After nine novels featuring clinical psychologist Joe O’Loughlin, this book feels like the start of another exploration of the complexities of a nuanced character in Cyrus Haven, no doubt with many more un-nerving and chilling psychological cases for him to work on. I’m not sure what role Evie might play in future books, but I have a feeling she’s not going anywhere.