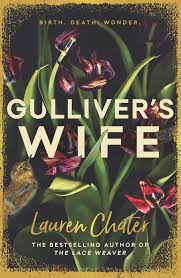 We’ve all heard the story of Gulliver’s Travels and his adventures with the tiny Lilliputian people, but have you ever wondered what happened when Lemuel Gulliver returned home with his extraordinary tales? How did his family and friends react to his fantastical stories? How did his wife cope, firstly with the news of his loss (and presumed death) at sea, and then with the return of the man into a life she had rebuilt without him? Gulliver’s Wife (Simon and Schuster 2020), by Lauren Chater, is a reimagining of Gulliver’s family circumstances, a beautifully written and literary historical novel that maintains a page-turning pace, heightened suspense and literal wonder on every page.

I cared so much about these characters and was unsure what would happen to them, right up until the very last page.

As the cover suggests, this really is a book about birth, death and wonder. Set in London in 1702, meticulous research immerses the reader in the sights, sounds, smells and tastes of that time, with gorgeous description, a multi-layered plot, and complex and engaging characters. This book looks behind the ‘famous man’ of Lemuel Gulliver, surgeon and sea-farer, and peels back the curtains to reveal the intimate lives of the women who knew him best – his wife Mary and daughter Bess.

Mary Burton Gulliver is a midwife and herbalist and the novel is bookended by authentic and visceral descriptions of the raw reality of giving birth 300 years ago, when women laboured at home with family and – if they were lucky – with the assistance of a local midwife. This was around the time that surgeons began to want to take over the birthing process and introduce ‘lying-in’ hospitals and surgical intervention. With that ongoing controversy, Mary plies her trade as a respected midwife, attending to births both difficult and easy, both wondrous and tragic. She and her sister midwives have inherited a body of knowledge about plants and their medicinal uses and she maintains herb gardens and mixes potions to treat all manner of pregnancy and birth-related issues. This part of the book had me absolutely hooked. The women, their training, their experiences, the obstacles put in their path, their vocational calling – I found it all enthralling.

But of course, this is only the background to the story. Mary has been ‘widowed’ for three years after her husband was presumed to be drowned at sea. She has rebuilt her life with her daughter Bess and son Johnny as best she can, regretting her decision to marry Lemuel at all because of his abusive and controlling nature, somewhat relieved that he has disappeared from their lives, and harbouring a secret yearning for the person she should have married had not circumstances intervened. But then the unthinkable happens: Lemuel is brought home without explanation, fevered and talking nonsense about the impossible things he has seen and done during his travels. No-one believes him and Mary is mocked for her husband’s apparent madness. At first she tries to care for him at home, believing that he will recover, but it becomes apparent that he really believes what everyone else thinks are his fantasies, and even when he does begin to physically recover, it is only to return to his previous abusive, violent and drunken nature.

Mary is in an impossible situation. She is now a wife again, and accordingly is under the care and control of her husband, both financially and emotionally. But rather than accepting this submissively, she clings subversively to her hard-won freedom and independence, and is determined to fight to retain her family’s honour. In the midst of this is 15-year-old Bess, a child verging on adulthood, who remembers her father only as a much-loved adventurer who promised to take her to sea with him one day. She thinks her mother weak and insubstantial. But as the novel progresses, Bess begins to see the quiet power of her mother in a new light and comes to terms with the terrible nature of her dominating father.

There is so much to love about this book. The writing is well-crafted and literary, but also highly accessible and readable. The characters, even the minor ones, are complex and interesting, with motivations and backstories that we can understand. The plot – a murderer on the loose; the challenges of midwifery; the complicated dynamics of family; addiction; societal and religious constraints on the roles of women – is full of sub-plots and fascinating tangents, including burgeoning romances (more than one). The setting is completely immersive and feels filmic in nature. And of course, because of the details of Lemuel Gulliver’s travels, the entire novel is shrouded in a light dusting of magical realism: what if he is telling the truth? What if his impossible stories are factual? When Mary and each of her children separately find evidence that corroborates his tales, what to make of that? Is Gulliver mad or are they treating him unfairly? What does it mean for him – and for them – if he is not suffering delusions but rather has experienced something rare and magical?

The exquisite cover with its gold foil surrounding the vaguely sensual rich red flowers embodies the heart of this book about the wonder and anxiety of new life, the persistence and courage needed to survive, and the grief and loss that surrounds death. Ultimately, it is a story of the determination and gumption of women during a time when that was discouraged, and they were considered chattels and property.

Lauren Chater’s debut novel The Lace Weaver, also historical, was very good, but the author has really taken a step up with Gulliver’s Wife, in the quality of the writing, the characterisation and the story itself. If you enjoyed Melissa Ashley’s books The Birdman’s Wife and her more recent The Bee and the Orange Tree, you will love this book.