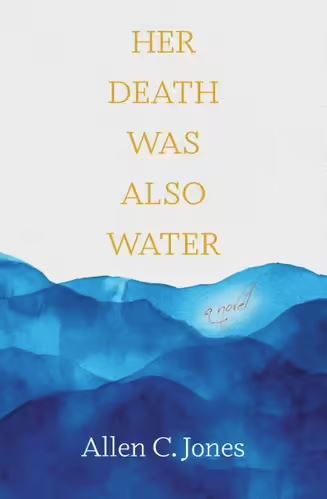 Her Death Was Also Water (Midnight Sun Publishing 2022) is the debut fiction novel by renowned poet and writing teacher Allen C. Jones, an American who lives in Norway (it’s a long story…) In this richly imagined, well-crafted and evocative tale, Jones somehow manages to combine the lyrical beauty of carefully chosen words with the page-turning suspense of a thriller with thought-provoking messages about climate change and masculinity, adding to this mix a sprinkle of magical realism that unlocks something extraordinary about the writing, leaving the reader breathless – anxious to find out what happens but also determined to linger with the poetic imagery he portrays.

In one sense, this story is like a locked room mystery – seven people thrown together on a small boat, trying to survive as the seas rise, surrounding them suddenly and inexplicably with a never-ending ocean. One minute the main protagonist, 15-year-old Charlotte, is walking home with her friend and the next minute the whole city is below them underwater. It is this improbability that elevates the story to another plane; we know, even as we read, that what is happening is impossible, and yet it feels absolutely authentic and explainable and real. In another sense, this is a story about grief and loss. Each of the seven people on the boat have lost someone close to them, either quite recently or in the past, and each deals with traumatic emotions in a different way. Blame, shame, regret, longing, desire and yearning are all at play. And in another, broader sense, this story encapsulates the bigger picture of climate change, climate emergency, humans’ relationship with the planet and with other creatures, hope (or otherwise) for the future, and uncertainty about what we are going to do (or are able to do) and whether or not we will do it.

The book opens with a prologue set 15 years into the future, after the main events of the story. Charlotte, now 30, is alone at sea, obviously searching for something or someone, with the world as we know it in tatters around her, most of it underwater, and the social rules forever changed. So it is not a spoiler to acknowledge that Charlotte has survived. But when the main narrative begins, it is very much an unknown as to which of the other main characters will make it through this harrowing ordeal.

The narrative is provided through the lens of multiple perspectives, which adds to the feeling of urgency, complexity and intimacy binding this small group together.

Most apocalyptic novels seem to transpire over several years of gradual disintegration, but this central story takes place over only days and weeks. It takes a while to get your head around the fact that everything has deteriorated quite so quickly, but once you accept that, the situation becomes all the more desperate and dangerous. We assume we have years and years to address our climate issues … but what if we don’t? What if one catastrophic or cataclysmic event could change life as we know it in only a few hours? None of us would be prepared. We likely would not be with those we love most, but with strangers. Who would we trust? In a Lord of the Flies type scenario, who would we elect to be leader, or who would put themselves in charge? Who would be generous and sacrificing, and who would be greedy and self-interested? Who would have the skills to actually do something useful? Who would capitulate under the emotional pressure? Who would remain strong and steady? These are all questions examined by Jones as he navigates family drama, friendships and the sense of community through satire and metaphor, through the telling of a tense and gripping survival eco-fiction story punctuated by relationship dynamics and very base human needs, desires, expectations and responsibilities.

This is a story difficult to categorise. It is adventure yet not entirely realism. It has magical elements yet is not at all fantastical. It contains messages about the value of earth and all its creatures yet it is not didactic. It is, at its heart, a story about the courage and determination of an adolescent girl, yet it will appeal to readers of all ages. It confronts the bravado and overbearingness of masculinity and men behaving badly, yet it also celebrates the emotional maturity and sensitivity of men. It addresses religion and education, class and race, sexism and ageism. No-one in this book is safe and no-one can be completely trusted. You will begin this novel with a definite idea of what is happening and gradually, your certainty will fall away with each chapter, as the earth changes, the people dissemble, and the very rules of physics and reality dissolve as in water.

Set in ‘a small (American) Midwestern town through a world completely transformed’, Her Death Was Also Water will appeal to both literary readers and those who just love a good, fast-moving plot.