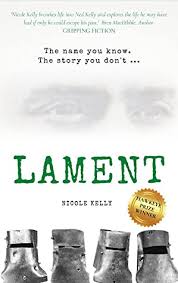 Everybody knows the story and the legend of Ned Kelly, but what if he could have escaped his past and built a different life for himself? Author Nicole Kelly (presumably no relation, but who knows?!) explores this idea in her novel Lament (Hawkeye Publishing 2020).

The truth of history is that in June 1880, the frightening reign of the Kelly Gang ended in a blaze of gunfire at the siege at the Glenrowan Inn, and although Ned Kelly survived, he was hanged four months later, supposedly guilty of his crimes. But in this creative re-imagining of the legend, Ned is given another chance, an opportunity for a different life. He keeps his band of brothers together and dreams of prosperity, liberty and freedom.

Lament is that genre that I call ‘faction’: historical fiction re-purposed and re-created into something new with the benefit of hindsight and imagination. Kelly (the author, not the man himself) has written this story with obvious attention to historical detail, and her dialogue in particular is reminiscent of the time. The words and accents draw the reader in to a particular place and setting, immersing us in that world. The plot is clever and satisfying. The book delves into Ned Kelly’s family, his love life, his objectives, his choices, his ideals and his loyalties. The small but important details that are included add to the authenticity and believability of this alternate universe in which an alternative reality might indeed have happened. If you are a fan of the Ned Kelly legend or Australian history in general, this book will surprise and delight you.