Lie Beside Me – Gytha Lodge 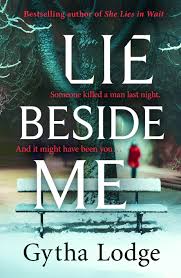 Lie Beside Me (Michael Joseph Penguin Random House 2021) by Gytha Lodge is a psychological suspense / thriller / crime story with a possibly unreliable narrator, a detailed police procedural narrative, and the interesting combination of a variety of perspectives which allows the reader to see events from different points of view throughout the story.

Lodge is an English writer and one of her previous novels was a Richard and Judy Bookclub pick, so she knows her way around a crime scene (and a page-turning novel). In Lie Beside Me, the story opens with the central character Louise as she wakes up foggy-headed and hungover in her own bed, but instead of her husband lying beside her, it is a stranger. And he is very dead. As Louise struggles to piece together fragments of memory about what happened the night before, we are introduced to a range of characters, both in her personal life, and in the police force which investigates the incident.

Louise writes every alternate chapter like a diary and it is not immediately clear who she is writing to – is it herself? Her husband? Her best friend? The police? It soon becomes apparent that Drunk Louise is a very different person from Sober Louise. Is it possible that one has done something of which the other is completely unaware? Or is Louise very clever at hiding secrets and managing deception? Her husband, out of the country at the time of the incident, has always made her feel loved … until recently, when she has begun to doubt his motives. And her best friend April is the life and soul of the party and her strongest supporter … unless her recklessness may have contributed to Louise’s situation.

DCI Jonah Sheens leads a team of investigators; they approach Louise – naturally – as their prime suspect. But the case becomes complicated. As they chase down every lead, watch endless hours of CCTV footage, interview witnesses, compile evidence reports and brainstorm possibilities, it is apparent that this is not a clear-cut case. And if Louise is, in fact, innocent, then who is guilty? And can they catch that person before they kill again? Or is it simpler than that, and the perpetrator is the woman who appears so guilty?

This book has so many twists and turns, right up until the very end. Like every good crime novel, there are red herrings and a parade of suspects and victims and witnesses, none of whom are to be trusted. There were a couple of points of evidence in the investigation that I thought were a little weak and perhaps implausible, but overall this is an engaging story where every time you think you have it worked out, the goal posts shift and you stop believing one character and begin to invest in another. Lodge has developed a complex web of connections that is quite a handful to manage but she does this skilfully.

The police team – their dialogue and camaraderie, their tensions and their close-knit associations – are all authentic and well thought out. We are given glimpses into the private lives of several of the officers involved. I’m not sure if Lodge’s previous books include these same police officers and detectives but I suspect they might. This feels like a workplace with a certain familiarity and presence behind it. I got the sense that I had fallen into the middle of certain ongoing situations that were perhaps started in earlier books and would be continued in future books. If that is the case, this is the sort of novel that would make a great TV series, because the spotlight continually shifts from one detective to another, allowing the reader to make connections with a variety of characters. If it is not the case, then the author has done a very good job of creating a believable dynamic amongst the group.

The novel includes diversity, domestic abuse themes and feminist themes as well as a touch of romance, women’s friendship and relationship problems. The storyline of Louise and the dead man dovetails well with the police component, with both plotlines moving along at a fast pace and eventually coming together in the sort of satisfying resolution that crime readers expect.