Meet Me at Lennon’s – Melanie Myers 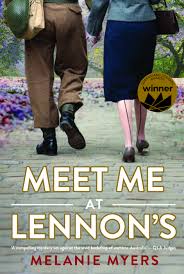 Meet Me at Lennon’s (UQP 2019) is the debut novel by author and academic Melanie Myers, the recipient of the 2018 Glendower Award for an Emerging Author (for an unpublished manuscript) at the Queensland Literary Awards. I was fortunate enough to read this manuscript when it was entered into the QLA, and it is enormously satisfying to see it now as a published book, and to note the editorial changes but more importantly how much of the story has remained the same.

To paraphrase Churchill, I would say that Meet Me at Lennon’s is a riddle, wrapped in a mystery inside an enigma. Set in Brisbane during World War II, this historical novel blends 1940’s Brisbane with a twin narrative set in the modern day, with threads and connections joining the two through both the characters and the story, and at the centre, the violent and unsolved death of the River Girl, a young woman found strangled in the mangroves at the opening of the book. The novel moves back and forth in time, and the reader must be sharp-eyed to pick up the hints and connect the dots throughout; but the reward is a remarkable and satisfying resolution that forces you to rethink all you had previously read, and consider everything – the facts, the characters, the plot points – in the refocussed light of new information.

The modern thread focusses on Olivia Wells, an academic completing a PhD on the works of writer Gloria Graham. In Olivia’s orbit are her boyfriend Sam, her friends Cheryl, Tobias and Clio, and her estranged father, Trevor. I don’t want to give any spoilers, so won’t talk too much about the plot, but at the beginning, Olivia’s research uncovers the mysterious death of the River Girl in 1943, and she is determined to find out more.

This narrative is juxtaposed with events of 1942 and 1943, when Brisbane was flooded with American soldiers and feelings ran high regarding their behaviour, particularly towards young Aussie women. In the words of the QLA judges’ report, the book ‘exposes the turbulent melting pot of racism, sexism and patriotism that culminated in the ‘Battle of Brisbane’ between visiting US soldiers and Australian diggers in the 1940’s.’ The judges also noted that Myers’ manuscript was ambitious and ‘successfully combined complex storytelling, authentic characters, fine research and sophisticated writing’. And these sections of the book set in the past are very engaging: we meet Dolly, Alice, Rhia, Val, Edith and June, all of whom have complicated relationships and backstories. From the modern performance of the play Tie My Apron Strings, Would You?, originally written by Gloria Graham, to the famous landmarks of the Carver Club, City Hall and, of course, Lennon’s, the lives of these woman are braided together between the forties and the present day. We see the young women in their prime, and we see some of them as much older ladies. We witness the constraints and social mores of the forties against the relative freedoms of today. We are privy to the reminiscences of some of the women as they recall those heady and dangerous days in a time of war. And all of this is counterbalanced by Olivia’s story – her own conflicted and complex relationships, her doubts and insecurities, her ambitions and desires.

This is a book founded on extensive historical research of a particular time and place, and the emotions that flourished due to the circumstances. It is also a story about family, and friendship, and ancestry and our search for belonging. And of course it is a compelling mystery about one unsolved murder of one nameless girl, an act that has been lost to the archives of time and largely forgotten. But as the narrative progresses, and the disparate threads begin to knit together into some form of cohesive shape, we begin to see the pattern emerge, and pieces of the story that may have seemed unrelated begin to coalesce into a surprising – but somehow inevitable – conclusion, with a timely comment on the role and rights of women, then and now – both the hard-won achievements, and the aspects that seem little changed.