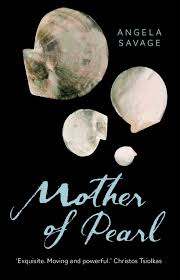 In Mother of Pearl (Transit Lounge 2019), author Angela Savage has given us a wonderfully diverse and engaging book with confronting themes that are sure to be hotly debated over a glass of wine in book clubs all over Australia. This is a nuanced and complex story of parenthood, most particularly what it means to be a mother. It’s a story of family – the yearning to create a family, and the sacrifices we are prepared to make in order to establish and maintain a family.

The central figures in this story are firstly Meg and Nate, a couple desperately hoping for a child despite years of fruitless IVF treatment. Meg’s older sister Anna has returned to Australia after ten years living overseas as an aid worker; she has very particular ideas and opinions about how Westerners govern their distribution of aid and the ideology and conditions they attach to it. And there is young, single mother Mukda, from a rural area of Thailand, who wants to do anything to help her son, her sister and her parents rise up from the grinding poverty in which they live. When Meg begins to investigate overseas surrogacy as a way for her and Nate to fulfil their desire to have a baby, Anna’s own experiences and history make their journey a contentious one. The relationship between the sisters, and between Meg and Nate, and Anna and her ex-boyfriend, are all fertile ground for discussions about commitment, loyalty, forgiveness and compromise. Added to this is the perspective of Mukda and her Thai friends – a point of view that Savage navigates with sensitivity and courage. These characters are divided by borders, by language, by culture and by class, and yet are united in their desire to bring a child into the world. The international sections (particularly the Thai component) feel authentic and well-researched, and are delivered with sensitivity and empathy.

The unsettling and delicate territory into which this book travels will have all readers asking themselves: ‘What would I do?’ The pros and cons of each situation are presented by different characters, and the complicated circumstances of surrogacy, parenthood, biology, nature and nurture are explored with a questioning approach that gives voice to a range of positions. The issues of exploitation, loss, longing and the judgement about all of these things loom large in the story, played out in the individual stories of the key characters. I am certain that many readers will begin this book with a definite idea of what they think about some of these issues, and will finish the book with either a changed position, or at least a more developed sense of curiosity about the issues at stake.

The characters are deeply likeable, despite their flaws. The plot is surprising and unexpected, right until the very end. (There is a twist to Anna’s story that I didn’t see coming, and which is wounding and sharp.) By the concluding pages, even the title of the book – Mother of Pearl – becomes so much more than the sum of those three simple words.

At one point, one of the characters tells another that this was ‘the moment she understood how to be a mother’, and I think that summarises the crux of this story: it is all about how to mother, how to parent, what happens if you can’t or won’t, and what you are willing to sacrifice along the way.