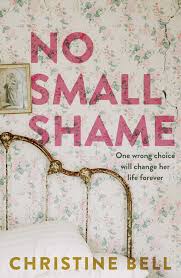 No Small Shame (Impact Press 2020) by Christine Bell is a romantic historical fiction set at the time of the First World War and featuring themes of migration, the trauma of war and the strength of women.

The book begins with protagonist Mary O’Donnell growing up in the centre of a firmly Catholic family in the grim reality and harsh conditions of a Scottish pit village, and moves fairly quickly through the early period of her youth and her family’s immigration to Australia. I felt this initial part of the story moved a little too fast, but it did cover a lot of ground and built the framework for the rest of the story, particularly concerning Mary’s relationships with her family members and her friends and neighbours, which all develop significantly throughout the novel. Once I got into the rhythm of the story and the characters, however, I was hooked.

The early part of the novel is set in a Scottish mining village and the characters from the two main families are each involved in difficult and dangerous underground work. The decision to migrate to Australia is made in the hope of a better, safer, more prosperous life, but it is not without its problems. There are moments in the story when you expect it to follow a predictable path but then there is an unexpected plot twist or a character makes a surprising decision or choice, or there is an emotional shift in the dynamics between characters that leads to the whole story following a different path.

Once in Australia, with war erupting around the world, circumstances are not as easy as anyone had hoped, and both families struggle to find their place, gain some security and build new lives. The shadow of war hangs heavy – the repercussions of the conflict itself in terms of physical and mental trauma, the treatment of foreigners, the attitudes towards those unable or unwilling to go to the front. Shell-shock, or PTSD as it would be called now, is explored particularly well in the second half of the novel, with one of the characters suffering terrible nightmares and physical disabilities, and mistreatment by both the Repatriation Board (which cannot seem to decide if he is well enough to work or malingering, and cuts his pension accordingly) and the family and community to which he has returned. His temperament and personality have changed and the author does a fine job of presenting a broken man who doesn’t even understand his own condition and has no idea how to explain it to others. The ripple effect of trauma on wives, children, parents, friends, neighbours and employers is depicted in chilling detail.

But it is Mary herself who is the hero of this story, through her determination and grit, her commitment to a better life despite the card of hands she is dealt, and her loyalty and sense of duty towards those close to her, even when they let her down and disappoint her. As a young woman, she is constrained by the dictates of the church and her strict family, and as she matures and has to face impossible situations, she never loses sight of how she wants to succeed where others have failed her, and to do right where she has been wronged. Throughout the story, she faces one disappointment after another, and just when you suspect things might be looking up for her, they again take a turn for the worse, and she is once again scrabbling to survive and to protect those in her care. This novel is a well-researched examination of the roles and rights of women at that time, the struggles and discrimination they faced, the hardships they were expected to endure and the small victories they celebrated, often silently. Without giving any plot spoilers, it is fair to say that Mary must endure a lot, but that she never gives up, and it is this grim determination to make a life for herself that drives the novel forward.

Passion and desire, unwavering friendship, unrequited love, unwanted pregnancy, escape, defiance, an overbearing and critical mother, marriage that is not what anyone hoped for, conflict of religion between Catholics and Protestants – this novel has it all. Mary’s compelling journey and her indomitable spirit are heartbreaking, moving and inspirational. Although she lived 100 years ago, her motivations and actions are comprehensible and compelling. Above all, this is a love story with many moving parts; one that shows the many sides of love: self-sacrificing, fickle, unconditional, passionate, companionable, trustworthy, hurtful, deceptive, kind and forgiving.