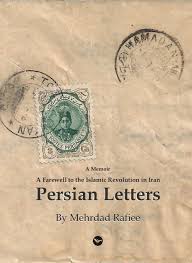 Persian Letters: A Farewell to the Islamic Revolution in Iran (Mehri Publications 2018) is a memoir by Mehrdad Rafiee, with proceeds donated to Médecins Sans Frontieres and Child Foundation. Despite the fact that the book is a quite detailed and well-researched (and footnoted) history of Iran, covering all aspects of life including political, religious, cultural and economic, it is nevertheless a surprisingly engaging read full of insight into Rafiee’s personal and family life, and the wider context of his country’s complicated history.

Memoirs can be self-indulgent but this one works because it is unashamedly so. Each chapter is in the form of a letter to the author’s sons, imparting the author’s recollections of his early life, his research, interspersed with photographs and documents, with many diversions to other tangential stories along the way, and Rafiee philosophising at length about what it all means. In this way, it is really a love letter to his country, his family of origin and his culture, but most of all to his children. Complex historical data is rendered interesting and relevant as the author consistently brings the reader back to connections with his own personal anecdotes and experiences. He returns again and again to the question of understanding history in order to make sense of the past and to prepare for the future. And his wonderfully dry, wry and sardonic sense of humour really shines throughout the entire book – he has a lovely way of undercutting any possible criticism of his home country with a sly aside about the impossibility of anything being less than perfect (while simultaneously pointing out the very obvious instances of corruption, poor decision-making, a lack of leadership, an absence of democracy and free will, and even much commentary on the qualities he feels Iranians in general lack … particularly when it comes to self-analysis or self-criticism).

But although the book culminates in the terrible revolution of 1979, and does focus on the social chaos and political upheaval that occurred even before that, it is also a story about one very close extended family, with all of their hopes and dreams, conflicts and plans. This is one of those books that you feel really did begin life as a series of simple letters from the author to his children, to ensure he captured his memories and his knowledge of ‘the old Iran’, and to make certain he leaves behind something tangible and constructive for the next generation. But because it is so intensely personal, combined with being also incredibly informative, the result is that the reader becomes invested in the author’s story, in his family’s history, and in their lives both in Iran and then later when they came to Australia. Rafiee’s account may be personal but he is clear-eyed about the subjectiveness of his version of events, and is quite open about his doubts, his philosophical questioning of both his own actions and those of his countrymen and women, and his acknowledgement that this book is not a scientific or historical resource, but merely a personal witnessing of his life thus far, and what he makes of it.

At one point he says: ‘I’m convinced that the only way to discover the roots of our discontent or to explain our fears and anxieties, is by digging deep into our childhood memories and experiences.’ And he does just that. In another chapter, he claims: ‘This is why we need to read history and learn lessons from it. If what I write here inspires just one person to read and research our past, then I will have achieved my goal and made a difference. I sincerely hope that, one day, the younger Iranian generation will find the time and inclination to read the history of their country, and to learn from my generation’s mistakes.’

While there are times when the text veers dangerously close to being over-emotional or self-indulgent, as memoirs can sometimes tend to be, the author kept me engaged and managed to sustain my interest firstly with his font of knowledge (I learnt a lot about Iran that I didn’t know!) and secondly by that irrepressible sense of humour, which he uses to keep the reader onside as if we are in on the joke; as if we are engaged in an intimate conversation. He avoids the pitfalls of memoir tediousness by keeping the writing fresh and by continually referring the historical to the current, the personal to the wider context and by using specific examples to illustrate broader themes and patterns.