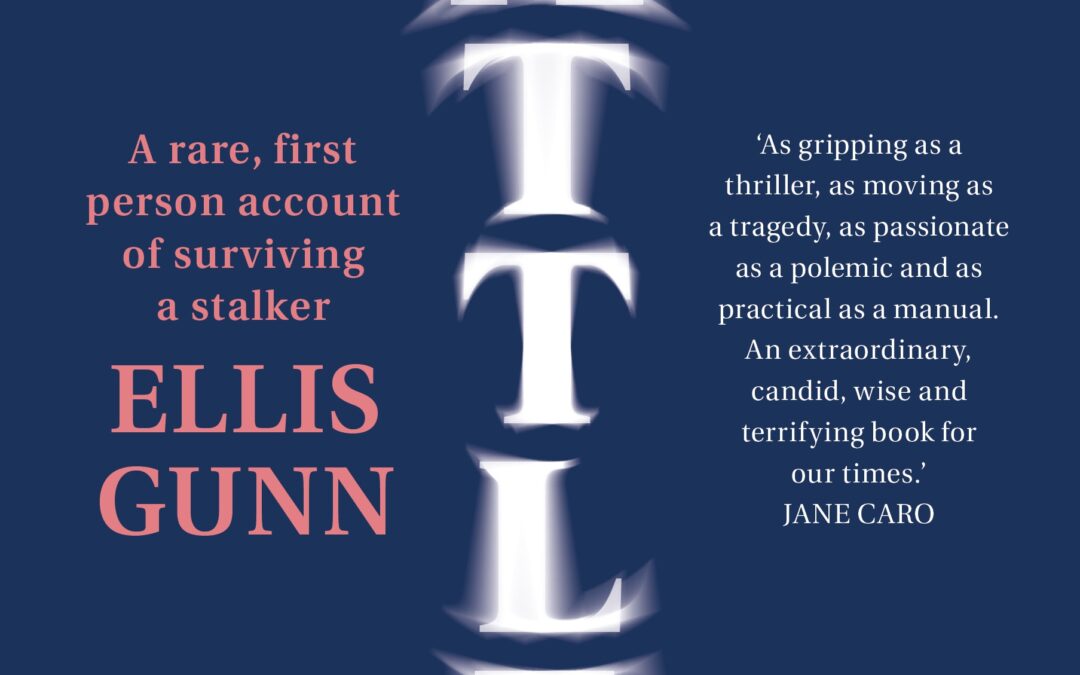 Rattled (Allen and Unwin 2022) by Ellis Gunn is a memoir/thriller/guide/manual of fear and optimism like no other I’ve read. The main context is a first-person account by Gunn of the intimidating and menacing Man who stalked her. He was a stranger; a person who casually struck up a conversation with her at an auction house and then proceeded, over a lengthy time, to stalk her in frightening ways, sometimes subtle, sometimes overt.

He would be parked outside her house. He would engage in conversation that was ever so slightly uncomfortable, but not enough to complain or report, because good girls stay quiet and don’t make a fuss and smile and, perversely, don’t want to turn away because they don’t want to make that Man uncomfortable. The Man turns up at her children’s school and her local café. He sends messages on social media. Gunn has made it quite clear from the beginning that she is not interested, thank you (always ever so polite), but this Man will not take no for an answer.

In writing this memoir, Gunn has unleashed a torrent of research and anecdotal experience about the act of stalking and how it goes hand in hand with the entitled, audacious and presumptuous attitudes of some men towards women – the idea that he is empowered to approach her under any circumstances, that she must tolerate his behaviour and that if she complains, she is being a whiny, frigid, unfriendly bitch.

Gunn wrote this book – relived this trauma – for one purpose: ‘To be bold, be bold … and don’t keep quiet about abuse.’ Because emotional abuse is as insidious as physical or sexual abuse, because women should not have to put up with this crap, because our daughters need to know they are powerful and strong and resilient, and our sons need to be respectful and kind. Because disempowerment. Because trolling. Because no means no. Because trust is earned, not taken for granted. Because a person is in charge of their own body and their own actions, and no one else’s. Because if you are a woman, or another vulnerable gender identity, you have every right to expect respect and fairness and fun on your own terms.

This book is written in an unusual structure which works really well. Gunn describes the various ways in which the stalker accosts her, and these sections read like a well-told story – tension, conflict, courage, action. Interspersed are accounts from her childhood and her life as a younger woman; incidents that over time have become to have much more meaning to her. Some of these incidents are ‘relatively minor’ – a verbal slight, a possible misconstrued misunderstanding, something that just felt a bit off, or not quite right. But some of the incidents are traumatising – from physical abuse to rape and everything in between. Gunn is a woman who, at this stage of her life, is reflecting on the entirety of her time as a whole, and what she sees from up high in that bird’s eye view is a compelling and distressing jigsaw puzzle that is only visible as a whole. The individual pieces happened over months and years; separately they did not seem to account for much. But Gunn uses this book to demonstrate how a collective lifetime of a thousand paper cuts of abuse and misogyny can lead to a life-threatening injury.

She also interjects the narrative with italicised internalised thoughts about rape culture, misogyny, belittlement, objectification, ‘boys will be boys’, slut shaming and more … because this, because that, because the other thing. Because this is an entrenched problem in every society and because the only way to resolve it is to open dialogue and conversations with both predators and survivors.

After her encounters with the Man, Gunn rationalises to herself that she is getting things out of proportion, that she is paranoid and overly suspicious, brainwashed by crime shows, overreacting, hyper-alert because of her own anxiety … ‘and yet, and yet …there WAS something strangely possessive about the way he spoke to me. I couldn’t quite convince myself that I was just imagining things. And as it turned out, I wasn’t.’

This book will be familiar to women who are alert to footsteps behind them even in crowded areas, who hold their keys in their fists like a weapon as they get closer to home, who are too polite to say they feel uncomfortable about certain behaviours. But it is also for men, to demonstrate women’s experiences, and to show how any interaction that may be completely innocent and friendly on the part of the man may not seem that way to the woman. And not because of any particular threat or fear, just because women have lived with this shit for so long that it is inbuilt in us to be hyper-vigilant, alert and attentive to possible danger. All. The. Time.

It’s also a book about language. Rather than advising girls how to act, we should be encouraging boys to act differently (eg body language, clothing). Because announcing that a woman was raped is so much less powerful and telling than a headline that says a man raped a woman. To shift the dynamic.

Rattled is a book about a woman who has been rattled her whole life; she has had the rattling stones of fear in her belly on too many occasions to count. But it is also a book about how she used those stones to build a cairn memorialising her courage, her resilience, her power and her strength.

Rattled is a non-fiction book about police and procedures, about anxiety and fear, about reporting and consent. It traverses self-blame and chronic pain as a result of abusive behaviour, and the effects this has on a woman’s family and friends and workplace. But it is never dry or predictable. It reads like a thriller, with the reader wondering with every chapter what will happen next. And it is full of what the author calls ‘Things I do to stay sane’ – practical and pragmatic thoughts and actions that have helped her navigate these unnerving incidents. Gunn uses her trauma to empower others, to encourage young women to have the self-belief and respect to know they are not responsible for the happiness of others. This book doesn’t have all the answers but it asks so many pertinent questions. And no, it is not about ALL men, but rather about the system in which we live that allows and even encourages distressing and disingenuous behaviours and entitlements. It is a book that states quite calmly (and not in any way ‘hysterically’ – insert eye roll) that we must all work together for change, that gendered violence and gendered inequity and stereotypes and victim blaming and coercive control have no place in a ‘fair and equal society’.

Gunn is also a poet, and so the book has a lyrical richness and beautiful language that makes it a joy to read, despite the harrowing subject. She has authored a cohesive, comprehensive and compelling story about the problems in the system, and how listening to each other is just the start of rallying change.