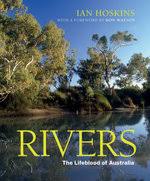 Just in time for Christmas ideas for the nature lovers in your life is this stunning, hardcover book Rivers – The Lifeblood of Australia (National Library of Australia 2020), by award-winning author Ian Hoskins. Filled with gorgeous photographs, maps, old black and white images and drawings, Rivers explores the life-giving veins that run through our mostly arid country, and what the rivers mean to us historically, culturally, developmentally and sustainably.

In his foreword, Don Watson exclaims that ‘… our lives are so bound up with rivers it is ruinous not to love them.’ From the original First People’s interrelated connections to Australia’s waterways, to the benefits and dangers of dams and the unhappy story of the Murray-Darling Basin, Australia’s complicated relationship with our life-giving waterways is celebrated and also described as being under threat.

Author Ian Hoskins has done a wonderful job of compiling many of Australia’s major rivers into a book that examines the diverse aspects of water and its role in our country’s history and development. He has devoted individual chapters to specific rivers, including The Murray, The Ord, The Clarence, The Franklin and The Snowy, plus many more. He refers to an ancient atlas, an historical document, that traces the original paths of these rivers, at a time when there were many more rivers than roads. He speaks of the importance of those ‘… thousands of thin blue lines – tremulous, organic and almost wriggling across the pages’, especially to the deserts and arid regions of inner Australia. He speaks of history, use, abuse, and sustainability. He discusses the interconnectedness and symbiotic nature of rivers.

This is a book that contains a multitude of facts for those interested, combined with an easy to read style with lots of anecdotes and fascinating stories. His wealth of historical knowledge is impressive and he includes a lot of well-researched Indigenous background, and quotes from sources such as environmentalists, authors, politicians, water security experts and from the people who actually use the land and rely on the rivers for their livelihood. He touches on the flora and fauna inhabiting our rivers, and the protests around rivers and National Parks. Well-referenced and a beautiful book to own.