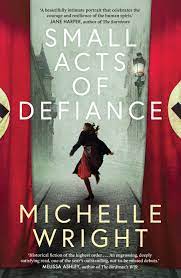 I so enjoyed Michelle Wright’s short story collection Fine, and the arrival of her debut novel Small Acts of Defiance (Allen and Unwin 2021) was much anticipated and worth the wait. An historical novel set during the early 40’s in WWII France, Small Acts of Defiance is a beautifully crafted story about just that – the small ways in which people resisted the German invasion and managed to stay alive, to assist others and to stay sane during the Occupation.

The novel opens in 1940 when, after a terrible tragedy, young Australian Lucie and her French mother Yvonne are forced to relocate to France to their only remaining family able to offer support, Yvonne’s brother Gerard. It seems crazy to move towards the war rather than stay on the other side of the world, but Lucie’s family’s circumstances are entirely believable. What they don’t immediately understand is not only are they relocating to a soon to be occupied German Paris, but they must share close quarters with Gerard, who is not as well off as he makes out (or is he?), plus he has extremist views that do not sit well with his sister and especially not with his niece, Lucie. Paris during the occupied years was a dangerous place to be – neighbours ready to denounce other neighbours as traitors, French citizens of Jewish descent discriminated against at first by the closing of their businesses and the limiting of their activities, and then fatally as they are summarily rounded up and transported to the infamous camps. All of this is viewed through the eyes of Lucie, who has only ever lived in the relative freedom of Australia and cannot countenance the terrible cruelty and brutality she is witnessing.

She befriends several people, both young and old, through her interest in art, and one particular friend Aline is an outspoken and courageous rebel who is unwilling to go quietly in the face of German aggression. But with so many citizens collaborating with the Nazis, every action Aline and her friends take must be secretive and clandestine.

I love the use of art as a form of resistance in this story. From the very beginning, Lucie sketches small drawings – of people she meets or notices in cafes, of the changing landscape around her – and when she is done, simply folds the paper in four and hides it in a tree or under a rock, in a crack in the paving stones or slipped into a stranger’s jacket pocket. This simple but evocative and moving idea sums up the whole narrative of the story – small acts of defiance which may even go unnoticed, but which are completed with a healthy dose of resistance and rebelliousness, boldness and cheekiness. When Lucie begins to expand her activities to include artistic pursuits that spread the resistance message, her heart and mind open to the enormity of the injustice she is witnessing, the small ways in which she might be able to help her fellow Parisians, and ultimately the incredible danger in which she places not only herself, but all those around her, through her actions.

The setting – both time and place – are authentic and very realistic. The author spent many years living in France and this shows clearly in her understanding of culture, place and local history. The characters emerge as engaging and compelling, and certainly with Lucie, we witness her growth over the course of the five-year span of the novel, as she transforms from naive, shy and unsophisticated to a young woman with considered values and morals informed by her experiences, a woman who is prepared to stand up for her beliefs and to act on her courage. This is not an easy journey, however, and all the way through the novel we are unsure how far Lucie will go to assuage her sense of injustice, and how much she might risk to help those she cares about.

This is a well-written narrative with authentic dialogue and a great eye for the detail of the time. By creating Lucie as an Australian character transposed to France, Wright has avoided the dreaded appropriation problem, as we see everything and everyone through Lucie’s eyes. Indeed, that is possibly what strengthens the novel – the perspective of an outsider who has not been gradually boiling in the water but has been dropped straight into the pot. Lucie sees situations in an honest and perhaps naïve way that is different from the complex loyalties of her French companions. The injustices are much more black and white for her, which allows her to express her anger, her disappointment and her disbelief in a different way than the French locals.

The novel is also an exploration of the affect of war on individuals in terms of their mental health and their reactions to subsequent conflicts. The characters who survived the atrocities of WWI are wary of the coming uncertainty of WWII, as of course they are right to be. Wright paints a thoroughly believable and moving picture of what it might have been like to live in France during the inexorable incursion of the Germans, and how that might have changed life, for Jewish and non-Jewish alike. She is an easy character with whom to identify, and her doubts, uncertainties, hesitations, disgust, rage and indeed, her small acts of defiance, are all relatable and comprehensible.

This is a wonderful text of a time much written about, but perhaps not from this particular angle before. An Australian girl in Paris facing the Nazi horror and the implications for her Jewish friends – an intimate and poignant tale. There is violence and death and loss in this book, but there is also art and friendship and hope.