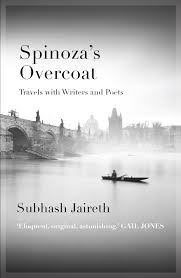 Spinoza’s Overcoat: Travels with Writers and Poets (Transit Lounge 2020) is a startling and original collection of essays by poet and translator Subhash Jaireth. He has published poetry in Hindi, English and Russian, published English translations of Russian, Japanese and Persian poetry, and translated poems of Indigenous Australian poets into Hindi. This book is an examination of the lives of the poets and writers that have inspired his own creative process, including Franz Kafka, Marina Tsvetaeva, Mikhail Bulgakov, Paul Celan, Hiromi Ito, Baruch Spinoza and others.

He explores their lives and their stories by travelling – sometimes literally, sometimes metaphorically or through his imagination – to the places they have lived, the houses in which they resided, the locations of their deaths, or where they created their best or most famous works. With tenderness, passion, poignancy, melancholy and ferocity, he details the minutiae that have surprised and delighted him, the words that have inspired him, the connections that have moved him.

This book will not be for everyone – it is certainly not a novel with a conventional narrative or a plot. But for those interested in poetry, writing, travel or biography, this ‘literary philosophy’ offers a powerful engagement with language and creativity, and with the lives of creative people.

From indomitably tracking down the exact location of an author’s residence to expanding on the socio-political tragedy of their death, from struggling to comprehend both the literal and the meaningful translation of a poem written in another language to searching through old photographs and correspondence, from investigating the less famous siblings of well-known writers to attempting to read between the lines of an author’s poem to the personal circumstances that have evoked it, from poetry displayed on the walls of buildings to the interpretation of rhythm and rhyme, Jaireth keeps returning to the idea that ‘… in order to respond to someone else’s poem, one has to take the poem like one takes a hand … only by taking a hand followed by a handshake can one ensure that a real encounter with a poem will happen’, and the idea that partially-translated poems are not failures, but rather it is ‘… a consolation to call them not-yet-understood poems; poems for which translators often wait for the moment when the poem and the poet will stretch their hands out for a handshake …’ The collection concludes with about a dozen translated poems that have been the inspiration for the individual essays.