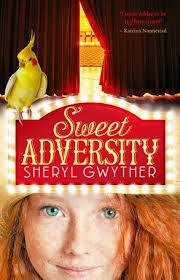 In Sweet Adversity (HarperCollins 2018) by Sheryl Gwyther – Children’s Author, we meet 12-year-old Adversity McAllister, a plucky heroine with a melodious voice and a feisty personality. Abandoned at an orphanage during the Depression years after her parents were apparently drowned, Addie spends her days performing plays and songs for the other children (and the cows), accompanied by her clever talking cockatiel, Macbeth, demonstrating all the skills she was taught by her parents who were part of a travelling Shakespearean Theatre Troupe. But the orphanage is run by the nasty Matron Maddock, and her officious sidekick, Algernon Parris, who take advantage of the orphans and spend their time hatching evil plans. When Addie discovers that Matron Maddock has arranged to sell her to Scrimshaw, a notorious child-dealer, so he can exploit her beautiful voice to make even more money, she decides to risk escape, taking her dear friend Jack and of course, her bird Macbeth. What follows is a journey of dangerous adventure as Addie tries to outwit her pursuers at every turn, in the hope of finding family and friendship with Jack. Through flooded creeks and city squats, from the Camp of Lost Children to a vaudeville show, Addie’s courage and optimism shine in the face of adversity.
What a joy to read a children’s novel with such a daring and determined young female protagonist. Addie is whip-smart, empathetic, brave, kind and persistent. She stands up to bullies. She respects those who earn her trust, rather than those in authority. She cares for the vulnerable and puts the welfare of her precious bird, Macbeth, and her friends, before her own. She has a wicked and mischievous wit and an infectious giggle. Young readers will want her to be their best friend.
The story, themes and setting of this novel have been crafted with care. Opening in the Emu Swamp Children’s Home, we get a very real sense of the deprivation, isolation, loneliness and despair of Depression era families – and how very much worse it was for the orphans. From the outback bush of the countryside to the cityscape of a young Sydney yet to complete its Harbour Bridge, historical Australia of a past era is showcased in a very accessible way for young readers (although adults will also sense the melodrama and fun of this story and appreciate the humour!) We are cheering Addie on every step of the way, and even when events seem darkest and most frightening, we’re hoping she finds a safe place to fall.
I thoroughly enjoyed this tale, especially with the Shakespearean references. This is a story about identity and belonging, about finding your place and finding your voice, about fighting for what’s important and claiming what is yours. And it’s also a story about a valiant young woman following her heart and chasing her dreams.