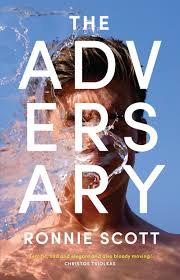 Ronnie Scott’s debut novel The Adversary (Hamish Hamilton Penguin 2020) is a strangely compelling, esoteric, stream-of-consciousness contemporary story that reminded me in form and language of novels such as Normal People by Sally Rooney. We are introduced to a group of young gay men who revolve around the narrator as he struggles in his search for self-identity.

Much of the narrative is seemingly benign – the characters sitting around the pool, staring at their phones, deciding whether or not to go out and socialise. Much is made of the small details – what they choose to wear, their affectations, how they drink and have sex, who they choose to spend time with, whether or not they converse over the kitchen table. Separately, these minutiae are pedestrian, even banal, but when combined together, the story becomes much more than the sum of its parts. Scott has constructed not only a way of life, but a way of being; he interrogates the narrator’s mindset and challenges his thoughts and prejudices, his doubts and insecurities, his hopes and ambitions. Nothing much happens in terms of plot – he takes a taxi, he flirts with someone at a party, he swipes through Grindr, he debates his own superficial thoughts and desires. But underneath all of that, the author builds a picture of the underlying meaning of the lives of these young men, he questions their motivations and their behaviour, he asks us as readers to step right into the space inhabited by these characters and to experience their lives, if only for a short while.

This is a novel about sexuality, dominance, control, sociability, friendship, desire, fear, inertia, agency and alliances. ‘I was an agent of Dan, a captive of his, really. I went where he wanted me, and did as he wanted, and for a long time, in this way, I was happy.’ This sums up the narrator’s ambivalence towards his own fate; his tendency to attach himself to others and react accordingly. The story begins and ends with a gift. The opening lines are: ‘A smart man once told me to be careful around gifts, as they’re often more complicated than they first appear. The savviest recipients plumb their gifts for hidden questions, such as what secret agenda has been furthered by this gift? And why have I been chosen to receive it?’ The conclusion also contains a gift, albeit of a very different sort, but one that again, asks as many questions as it answers. There are many innocuous phrases that nevertheless express a familiar opinion or quandary, such as: ‘Their living together suggested that Lachlan was more mysterious than he seemed, or that Chris L was less mysterious than we’d judged him to be. I did not know which scenario was more likely.’ Or this: ‘… so I resigned myself to a narrow life, a joyless tomorrow.’

This is a very literary and highly unusual novel that will appeal to readers who like to be dropped into the messy life of strangers, without a map or a compass, and try to work out what the hell is going on. It is warm and tender, intimate, moving, funny, ironic, neurotic and honest; a surprising and sharply observed tale of the authentic details of the human experience.