The Animals in That Country – Laura Jean McKay 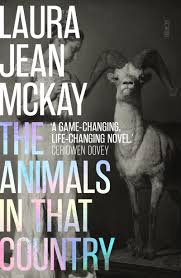 The Animals in That Country (Scribe 2020) by Laura Jean McKay is certainly one of the most unusual literary novels you’ll ever read. Set in a recognisable world, but at the time of the appearance of an infectious contagion (sound familiar, anyone?), the book describes what happens when the flu-like virus spreads across Australia. As the pandemic creeps up from the southern states, the chief symptom is the most critical: infected people begin to understand the language of animals, first mammals, and then, as the disease progresses, birds, reptiles and even insects.

The result is an overwhelming cacophony of sound and noise and ceaseless voices, which has the effect of driving many victims completely mad, resorting to all manner of band-aid solutions to try to block out the constant chatter from every living thing.

This apocalyptic tale begins in a native wildlife sanctuary and the protagonist, Jean, is the best part of this novel. She is a hard drinker, a furious smoker, foul-mouthed to all and sundry and ‘allergic to bullshit’. She is also a guide at the sanctuary, and most importantly, grandma to young Kimberly. Both Jean and her ex used to work at the wildlife park, before their son got together with Ange (who now manages the park) and produced Kimberly. The twin lights in Jean’s life are providing occasional care for this little girl, whom she loves dearly, and being around the animals at the park. Everything else – her casual hook-ups, her terrible hangovers, her bad attitude – keep her on the wrong side of almost everyone, particularly Ange. It is only Kimberly that loves her unconditionally. Jean is a fantastic character with a distinctive and instantly recognisable voice. Her relationship with one of the park’s dingoes, named Sue, glows with warmth, irascibility and the comfort of familiarity.

When the strange flu reaches the outback park, and society begins to crumble outside, Jean and the other workers at first try desperately to lock down and quarantine the facility. But this proves impossible, and when Jean’s estranged son Lee arrives unexpectedly, and then disappears, taking Kimberly with him, Jean is compelled to follow. She and dingo Sue – who helps her navigate along the way – begin an urgent and desperate journey to find and save her granddaughter.

The first third of this novel is extremely compelling and I couldn’t wait to read how this unique experience – humans able to communicate with animals – would evolve. Unfortunately, I feel that the narrative loses some of its urgency and pull once the animals do actually begin to speak (or once the human characters can understand them). The words the animals mutter are bizarre and encoded; not like ordinary speech. I realise that expecting animals to converse in the same way we do is a prejudiced view of mine, rather than a problem with the writing, but nevertheless I found the conversations sometimes jarring, with the effect that it pulled me out of the story as I struggled to comprehend their veiled meanings. I held great hopes for this unique literary angle, and I wish that the author had given me more than I expected in this regard.

Despite this, The Animals in That Country is a very good book – literary, great characterisation (particularly with Jean), a weird and engaging plot, and plenty of page-turning action. The author has gifted us an original, dark, extraordinary story that moves all the goal posts and expects the reader to shift perspective and accept a whole different, strange new world. And the message of the novel is profound: What if the animals can speak? What if we can understand their words, and they can understand ours? What sort of world would that be? If we could communicate with individual animals, birds, whales and insects, how would that change our relationships with them? How would the dynamics of interconnectedness shift? Where would our responsibilities then lie? And once we had experienced such wonder, would the benefits be worth the pain? Or would we rather go back to ignorance and silence?