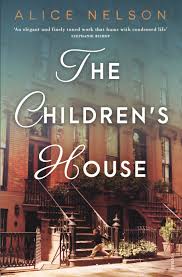 The Children’s House (Penguin Random House 2018) by Alice Nelson is an extraordinary rendering of family, place, the dynamics of relationships and most of all, the complex and intricate ties between parents and children – not only their own, but also the children of others. In beautiful, literary language, Nelson weaves together the stories of the main characters, traversing backwards and forwards in time, through memories, to capture something profound about the way in which families function, how they bind together and survive trauma and tragedies, and also to show the many ways in which they don’t survive, or at least the ways in which they fail – by fracturing into irreparable pieces, by disappointing those they are meant to love and support, by allowing circumstances to create obstacles too difficult to navigate, or by failing, somehow, to be enough of what others need them to be.

Set in Harlem, New York – a place of gentrification sitting side by side with the poverty of housing projects, much of the story takes place in the old brownstone building that used to be a convent full of nuns. But we also travel to Cape Cod and Narrowsburg – and each place is imbued with feeling as Nelson depicts the environment and the surroundings, the weather, the local flora and fauna, the unique atmosphere of each location. And whether we are in modern-day New York, wartime Europe or war-torn Africa, the exquisite writing transports us with all senses to that specific era.

We all know that families come in all shapes and sizes, and The Children’s House illustrates families in many forms. There is Marina, who grew up on a kibbutz in Israel with her beloved brother Dov, long gone, and her mother Gizela who has also long since disappeared from her life. Marina has made her life with Jacob, who coincidentally was also raised on a kibbutz. Their shared childhood experiences of being nurtured not by a nuclear family but communally raised by the carers in the kibbutz’s children’s house shadow their own life together with the unusual circumstances of their very first notions of family. Although Jacob’s extended family is very close, he is scarred by the desertion of his first wife, Leni, who left him and their only child years earlier when Ben (now a young man) was three years old. After an absence of three years, Leni returned sporadically to their lives, but the hurt has never quite healed. Marina has been a part of Ben’s life since he was ten but is constantly aware of the impact on him of that early maternal absence.

And into this dynamic comes Constance, a young Rwandan woman with a toddler, Gabriel, strapped to her back. They meet by chance on the side of the road, when Marina witnesses a disturbing incident between mother and child. Constance is quiet and watchful; the terrible, unknowable and unimaginable history of her experiences in Rwanda during the genocide remains unspoken. She seems so out of place in Marina’s Harlem, so utterly unequipped for the basic requirements of living, let alone mothering, and Marina is drawn to her in a compelling way that she cannot seem to control. Marina doesn’t understand if she is helping or hindering; if she is being exploited or being exploitative. Young Gabriel is mute and wide-eyed, more of an attachment than a child; not only does Constance seem barely able to survive each day herself, let alone care for a small child, but her pervading vibe is that she just doesn’t care. Despite – or perhaps because of – Marina’s own splintered family of origin, and also her concerns about Ben, she becomes inextricably linked to the fate of Constance and Gabriel, and tries desperately to bridge the cultural divide between them and her own life.

And there is another sort of family – a group of nuns gathered together from different convents, and now living in the one retained home, watched over by Sister Vera, herself now elderly, but the other remaining sisters even older, in their nineties, caring for each other while they wait patiently for their lives to come to an end.

So many variations on the theme of family; so many possible ways to love; such a rich and dynamic contemplation of the many permutations of familial bonds.

This is a story about the terrible wounding that parents can inflict on their children, and the great source of hurt that children can be for their parents; but it is also a story about the empowering love that can endure and prevail, a kind of deep, familial love, even amongst those who are not related by blood.