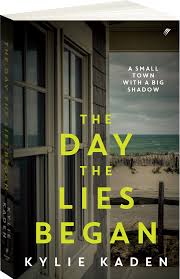 Author Kylie Kaden’s third novel The Day the Lies Began (Pantera Press 2019) marks her launch into the domestic noir-thriller market. A combination of crime novel, psychological thriller and an exploration of family dynamics, the book revolves around the friendship between four adults (two couples) in the small coastal town of Lago Point, and how the fateful event of one night reverberates throughout their lives.

Abbi is a wife and mother to five-year-old Eadie, Blake is the town cop, Will is the local doctor and Hannah is a schoolteacher recently returned from overseas. The relationship dynamics between all four are complex and tangled. On the day of the local Moon Festival – capped off with an evening of music, lanterns, food and fun – something happens that changes everything for each of the four, for different reasons and in different ways. The structure of the novel takes us back and forth in time from the day of the Moon Festival to the days and weeks following it, gradually building a picture of what actually happened that night.

This book is all about secrets and lies (as the title suggests). Each of the characters (and not only the main protagonists but also other minor players) have secrets they have chosen or have been forced to keep, and after the Moon Festival, each begins to lie to the others in order to protect themselves. But Lago Point is a small town, and deceptions have a way of rising to the surface (literally).

A complicated moral quandary about right and wrong, The Day the Lies Began explores themes of ethical complicity, loyalty and betrayal, blame, shame, judgement and forgiveness. When some of the victims become vigilantes, are they justified in doing so because of what they’ve been through? Or should the truth always be told, no matter what the cost to those who have already suffered?

An easy read with some thought-provoking subject matter.