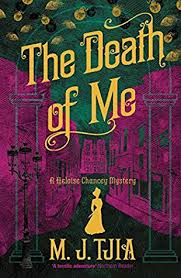 The third book in the Heloise Chancey Mystery series, called The Death of Me (Legend Press 2019), follows She Be Damned and A Necessary Murder, all written by crime writer M.J. Tjia. This novel, somewhat slimmer than its predecessors but just as tightly crafted, is a stand-alone story but nevertheless resolves many of the ongoing mysteries of the first two books, particularly those surrounding Heloise’s Chinese maid, Amah Li Leen. In fact, in this book every second chapter is devoted to Amah’s perspective, as her past catches up with her as she goes on her own adventure.

Set again in the mid 1800’s (1864), courtesan and private amateur detective Heloise Chancey is required to go undercover to spy on various suspects surrounding an elaborate assassination plot. As she travels between London and Paris, Heloise must use all her powers of perception – and her feminine wiles – to uncover the truth about deadly bomb attacks and political conspiracies.

In a departure from the previous books, Amah has her own completely separate storyline. While Heloise assumes Amah is waiting patiently at home, brooding over their postponed trip to Venice, Amah is actually drawn into a dangerous kidnapping and blackmail plot that threatens her life and reveals many secrets from her past.

M.J. Tjia writes historical crime fiction with a feminist agenda and a sharply attuned ear to racial discrimination and stereotypes. Her protagonists are strong women who wield their power with poise and grace under pressure; women who have survived difficult and traumatic pasts and who now determine their own fates. The Death of Me is written in lyrical and descriptive language with dialogue true to the time. The characters and their circumstances feel authentic. This whole series would make a perfect Sherlock Holmes type mini-series, with a similar immersion into the costumes, food, transport, living conditions, manners, hypocrisies, deprivations and excesses of the time. Tense, witty and sharply observed.