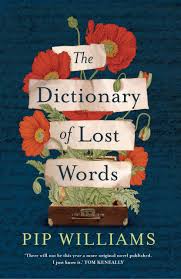 Pip Williams’ first novel The Dictionary of Lost Words (Affirm Press 2020) is very different from her previous travel memoir One Italian Summer, about the year her family spent farming in Italy. This novel is an historical, literary exploration of the meaning we ascribe to words, particularly the gendered meaning, in a fictional story fashioned around the true facts of the creation of the Oxford English Dictionary.

Set from 1886 onwards, the tale begins with five-year-old Esme who spends her childhood sitting under a sorting table in the Scriptorium, a garden shed in Oxford where her father and a team of lexicographers are gathering words – and choosing which to include, and with what definitions – for the first Oxford English Dictionary. Importantly, the group (of men) also decide which words to leave out, and for the most part these are words spoken exclusively by women, or considered by the men to be impolite, crude or unnecessary.

Esme spends years beneath the feet of these lettered gentlemen, collecting discarded or forgotten words after initially finding a slip fluttering unnoticed to the floor with the word ‘bondmaid’ inscribed on it. She rescues the forgotten word, and slowly begins to collect others, hiding them in a wooden trunk of her friend Lizzie, the maid in the big house. As she grows older, and ventures out into the world, Esme discovers more and more words that are in common use but that seem to have no place in the official dictionary. And so she decides to create her own collection, The Dictionary of Lost Words, that helps her make sense of the world. Her curiosity and diligence lead her to realise that while some words are considered more important than others, women’s experiences and voices often go unrecorded.

This story is set within some major world events including the women’s suffrage movement and World War One, which each affects Esme’s life in irreversible ways. Her personal story is told through the lens of these larger-scale events, and her relationships, friendships, loves and bonds are woven throughout the significant moments of the century.

This is a beautifully written, lyrical, tender and engaging read about one young woman’s life; the challenges and obstacles she faces, and the ambitions and hopes she nourishes. It is a most informative and knowledgeable account of the history of the creation of the Oxford English Dictionary over many decades, and the story of what happened to the real-life people who worked on it over that time. It is also a thought-provoking examination of the suffragette movement, the women (and men) who supported it, the battles they fought, sometimes winning and sometimes losing, and the endgame results for which those battles were raged.

I did wish that some of the relationships in the book – particularly Esme’s romantic unions – were explored with more intimacy and depth. The tenderness is clear but sometimes the passion – and the results of that passion – are less defined and in some places, lacking. And the story does cover a lot of years, with some large gaps between sections, although we are generally able to fill these in for ourselves. But those are small criticisms for what is really a wonderful book full of eccentric and memorable characters, a creative historical plot based in fact, a love song to words and their meanings, and a timely reflection of the role of women and their unique experience of language. If you loved Gulliver’s Wife by Lauren Chater, The Bee and the Orange Tree or The Birdman’s Wife by Melissa Ashley or Hearing Maud by Jessica White – all novels which focus on the imagined lives of women in a factual historical setting – then you will enjoy The Dictionary of Lost Words.