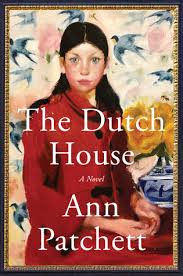 Ann Patchett’s books are consistently great – beautifully written, with complex plots and storylines, fully-realised characters, authentic dialogue and the intricate details of place and setting that complete the scene. I’ve read all but one (my favourites to date being State of Wonder, Bel Canto and Commonwealth) but now her latest novel, The Dutch House (Bloomsbury Publishing 2019) can be added to that list. Patchett is such an accomplished storyteller, and has honed her writing craft so well, that her novels are like worlds of their own, utterly compelling.

Someone once said ‘I know I have a good story when each side has a legitimate argument’ and this is never more true than with an Ann Patchett novel. The plots are so complicated, often set over decades, and the characters each have their own perspective backed up by their own motivations or backstory so that it is easy to sympathise with both sides but difficult to choose how you would act yourself in the same situation.

The Dutch House is a ridiculously ostentatious home abandoned by its Dutch owners, the VanHoebeeks, in the 1920’s, the family leaving all their possessions behind, including everything from full-size portraits of themselves and various family members to the clothes in the wardrobes and the silver in the dining room. The house, with its elaborate carved ceilings and gilded flounces, its three stories of luxury, is purchased by a man as a surprise for his wife. But she hates the house and at the story’s opening, has already been absent from the family for years (gone to India to help the poor). The central characters are the couple’s children, Maeve and Danny, and the book begins with the unceremonious introduction of their father’s new friend, Andrea, into their lives. And so begins a traumatic and catastrophic series of events that result in Maeve and Danny, even as adults, being drawn back again and again to this house that they lost, both haunted by the people they believed had taken it from them.

There are so many levels to this story. It is about grief and loss, betrayal and forgiveness, greed and loyalty, about holding grudges and letting go. It is about family and the intricate dynamics of relationships. The cover is a portrait of Maeve when she was 10 years old, and features as a motif in the book as much as The Dutch House itself.

The central relationship explored is between siblings Maeve and her much younger brother, Danny (who is the narrator). Their connection is so close, their interactions so intertwined, their love for each other the most important thing in either of their worlds, even as they get older. The mystery of their absent mother, the tragedy of their misunderstood father, the despicable acts of their stepmother, the usurping by their stepsisters, their ignorance of their family’s history or financial situation, their deep affection for the three servants who belonged to the house, all the things they didn’t know and all the things they learnt too late – all combine to create a story of unbearable tension. The key points where the kaleidoscope turns: the moment when the siblings realise they have one loophole to take revenge on their stepmother; the place in the story – just when you feel you cannot loathe the woman more – when Patchett shifts gears in a way that makes you understand both Maeve and Danny’s reactions and perspectives from a completely different angle; the ending, so surprising and unexpected, so unlikely, and yet so completely believable (because fiction is never stranger than truth)…all of this is done with such sophisticated storytelling, such immersed engagement with the characters, such care about their fates, that by the end you are left reeling with all sorts of emotions, and a feeling that you somehow know these people and that their problems and experiences are familiar to you. This book is full of unforgiveable decisions and improbable choices and yet, by its closing pages, each of the characters seems somehow comprehensible. The more I think about this story, the more empathy I feel for even the dislikeable characters or the people who have committed the worst offences against their family members – abandonment, banishment. And the more I begin to understand bereavement, loss, sacrifice, ambition and forgiveness. Families are complicated creatures and Ann Patchett is the ultimate storyteller, able to bring to life all the failures and foibles, all the love and belonging, all the choices and risks and sacrifices.