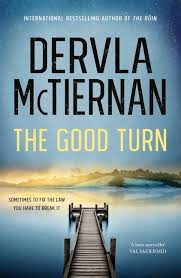 Irish / Australian author Dervla McTiernan’s third novel The Good Turn (Harper Collins 2019) builds on her crime series featuring Detective Cormac Reilly, after the success of her previous books The Ruin and The Scholar. Once again, she gives readers a solid police procedural, a fast-paced plot with plenty of twists and turns, crime and corruption, and most importantly, a character-driven narrative that is as much about the people we have come to know and care about as much as it is about the story itself.

McTiernan is doing something really clever with this series: each book focuses on a different main protagonist, so that even though Cormac Reilly is always featured, each novel shines a light on another character close to him – either personally or professionally – and provides space for that person’s circumstances to be fully explored. In this way, we have the continuity of the central characters but we are also introduced to minor characters in one book who become the focus for another story, or to new characters who are pivotal to Reilly’s situation.

In The Good Turn, police corruption is again at the centre of the story, as Irish Garda fight forces from within while also concentrating on solving crimes. The book is structured in two timelines (which McTiernan does very well). We learn much more about the life of Cormac Reilly, who – despite his best intentions – seems to careen from one personal and career train wreck to another. Unseen enemies at his work have hidden motivations, and his partner Emma (after her traumatic experiences in the last book) is taking some time and working away in Brussels. Long-distance relationships are hard. His colleague Garda Peter Fisher is transferred from Galway under a cloud of suspicion and while Reilly attempts to clear his name, Fisher is forced to work for his overbearing father in the small village of Roundstone, where the boundaries of law and order are blurry, and the local police rule very much by their own discretion. And the third plot point is single mother Anna and her daughter Tilly, who doesn’t speak, possibly due to some past trauma. They are seeking refuge – but can they really escape? And who can they trust?

Once again, McTiernan offers a complex and interesting crime novel with an abundance of well-drawn characters, all with their own believable backstories. And once again, she treads that balance bar of what is right and wrong, what is black and white. Sometimes good people do bad things for good reasons; sometimes bad people are a complicated shade of grey. She casts doubt and suspicion on the behaviour and motivations of all of her characters, even the ones we have come to love, and that’s what makes her books so readable: unpredictability and uncertainty. It is a delight to again become immersed in Galway and the Irish Garda life, and Cormac Reilly remains a beleaguered but beloved hero.