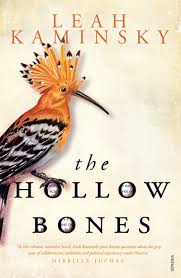 Leah Kaminsky’s novel The Hollow Bones (Vintage Penguin Random House 2019) is a reimagined historical fiction of the (real) life of Ernst Schafer, an ambitious young German zoologist, hunter and collector who spent his life in the pursuit of knowledge about many species, but particularly birds. Set at first in 1936, Ernst’s reputation attracts the attention of Heinrich Himmler, who arranges for him to lead an expedition into the isolated mountains of Tibet. Although ostensibly a scientific research trip, the members of the group are also SS men, and orders from above demand an examination of the origins of the Aryan race, fabled to have Tibet as its source.

But as Ernst doggedly follows his dreams of scientific endeavour, he is also drawn to the honour and fame of rising up through the ranks of the Third Reich.

This book has several simultaneous layered stories. Ernst’s childhood sweetheart, Herta, the woman he will eventually marry, loves him deeply and admires his scientific zeal, but she secretly harbours doubts about his methods and the Nazi machine in which he becomes increasingly entrenched. Some of the most interesting sections of the novel involved Herta’s history, her family (including her disabled sister), her love of music and her appreciation of all living things, all of which are often at odds with Ernst’s occupation and responsibilities. Kaminsky’s intricate and detailed research of subjects such as the fascinating Nazi Bride School add depth to Herta’s character.

One unusual aspect of the book is the occasional chapter told from the perspective of a stuffed panda in a museum exhibit. The panda – one of Ernst’s earlier acquisitions – has in 2019 a rather unnerving sentience as he recalls memories from 80 years ago, when his life was Wild and not Glass. As a literary device, this serves to orientate the reader in the now whilst giving perspective on the past. It is fanciful and whimsical, and contrasts sharply with the sombre content of the rest of the book.

The Hollow Bones allows the reader inside the mind of a young German scientist who follows his passion. But in the process, his appreciation for nature becomes a naked ambition to collect and catalogue it (as happened the world over, to the detriment of many species which did not survive the relentless hunting). Running alongside this, however, is the narrative of Ernst as a rising SS star. The parallels between his scientific endeavours and the Nazi determination to extinguish those they deemed inferior (not only the Jewish race but people with disabilities or differences) is chilling in its historical reflections. It could be taken as a reminder that tragedies happen when good people stand by and do nothing, however at the conclusion of the book, Kaminsky includes a ‘where are they now’ section of notes on the main (real) historical characters of the book, and this is a sobering end, as we read of whether or not the people in this novel were ever tried or convicted, of what they may have been found guilty, and what – if anything – was their punishment. Some of them have only recently died. It makes the past seem much closer to today than we realise, and historical horrors seem relatively recently borne.