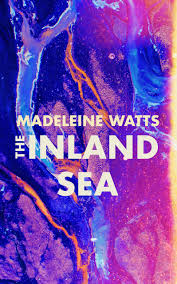 The Inland Sea (One / Pushkin Press 2020), the debut novel by Madeleine Watts, is not at all what I expected. From the blurb, I was prepared for an historical story about explorer John Oxley travailing the wilderness of central Australia in the 19th century, searching for water and the myth of the inland sea, but rather than this being the central tenet of the story, it is only a touchstone for the main narrative which is set in the present day and concerns Oxley’s great-great-great-granddaughter and her search for meaning in a 20-something coming of age story.

While Watts does refer back periodically to the historical aspect, it is a way of saying something profound about humanity’s search for that which eludes us, and our frequent optimism that there is something ‘out there’ if only we could find it.

This book reminded me very much of Ronnie Scott’s recent novel The Adversary, and if you enjoyed that, you will almost certainly like The Inland Sea. The language is beautiful – literary, languid prose that meanders along from time to time, and from place to place, stepping lightly over the structure of plot and concentrating more on the stream of consciousness revelations of the characters. In fact, in terms of plot, not much happens – the book is more about connections, thought and ruminations.

There is one particularly beautiful page that stood out for me – page 123. It begins: ‘Certain promises are made to us as children. Only in adulthood does it begin to dawn on us that many of those promises cannot be kept.’ It continues until the final paragraph: ‘But our lives contain no line breaks. Our experiences are so frequently unbearable to us because real life is just sheer bloody continuity. The excruciating thing is not to have witnessed the person you love commit, upon your person or another’s, an unforgiveable act. The excruciating thing is that time carries on and you love them anyway.’ I found this whole section quite profound.

The protagonist works as a call centre operator for triple zero, and the ongoing daily drama of emergencies remains the backdrop to her own life of self-destructive behaviours, drinking too much, sleeping with strangers and continuing an on again / off again affair with a man she knows is not good for her. The novel also charts her sexuality and problems with contraception (or the result of its lack) – another area of her life that seems to spin beyond her control. The ties between the triple zero emergencies and the increasing fires, floods and violence of nature that seem to be escalating are also explored. There is a section towards the end that focuses on climate change and environmental disaster and it felt somewhat tacked on, almost as if the author decided to include that aspect as an afterthought; I could see what she was doing but don’t feel that it quite worked.

But despite that, this novel is eloquent and contemplative, at times dreamlike and at other times full of frank and unflinching questioning. It is a novel about yearning and longing, both for what we imagine might be out there and for what we think we might want. The thirst of the early explorers is replicated in the thirst of the contemporary characters for all the seemingly unattainable desires in their lives. It is a study of character and, like The Adversary, of the many small details that make up a life; the myriad decisions, thoughts and behaviours that map out our path.