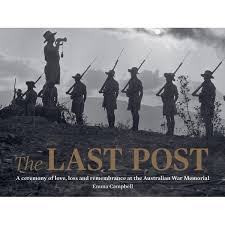 I may have started reading The Last Post (New South Publishing 2018) for research after winning a copy from author Emma Campbell in the #AuthorsForFireys bushfire auction, but I continued reading because of the amazing stories and remarkable photographs that comprise this non-fiction coffee table work of art. The Last Post is a description of the Last Post ceremony that occurs each day at the Australian War Memorial as a tribute of love, loss and remembrance to those Australians that have given their lives in various conflicts from the Boer War to Afghanistan.

Started in 2013, ‘every evening, people from all walks of life gather together … [to hear] … the story of one person who died in war or on operational service … read by a serving member of the Australian Defence Force … and the event concludes with the playing of the Last Post, a bugle call that has come to symbolise a farewell to those who died on the battlefield’.

Campbell’s book is a tribute to the over 102 000 people who have died, an in-depth examination of the War Memorial and what it represents both physically and metaphorically, and a moving depiction of the lives of some of those lost. A hardback, landscape print version, The Last Post is a combination of chapters covering topics such as The Origin of the Last Post, The Families of the Fallen and Ceremonies for Special Occasions, all accompanied by absolutely beautiful full-colour and black and white photographs of the ceremony taking place, including laying of wreaths, state visits, general public and school visits, the families of those remembered, official dignitaries and military personnel and others. Interspersed with these informational chapters are individual stories of those men and women who have fallen; the stories of their lives before and after enlistment, their actions during deployment or service and the manner of their death, accompanied by historical photographs of each person. The result is a tender and poignant collection of anecdotes sharing the personal and military details of so many different ADF personnel, from those killed in action during World War I, to those who died in World War II, to those killed in Vietnam and Korea, in Iraq and Afghanistan and Somalia.

This ceremony, instituted by the Director of the Australian War Memorial, Dr Brendon Nelson, was inspired by his many visits to Ypres, Flanders, Belgium to attend the Last Post Ceremony at the Menin Gate. He said that ‘Gazing up to the thousands of names inscribed onto this magnificent memorial to the ‘missing’, I longed to be told something about just one of them.’ And so began the ceremony in Canberra, with the first soldier honoured being Private Robert Poate, killed in Afghanistan. With a large photograph of him by the Pool of Reflection, and his family and friends gathered, Private Poate’s story was read out by a serving ADF member. And this same ceremony has occurred every evening since, each night featuring the life story of a different fallen comrade. Sometimes these men and women are chosen randomly, sometimes at the request of family members, sometimes highlighted by the researchers at the Memorial. But every one is conducted with solemn pride and humility and respect for the life they have given in service to our country. Some feature well known battles such as Gallipoli and Kokoda while some shine a light on lesser-known war fronts. The racial composition of our armed forces, including the contribution of Indigenous Australians, is emphasised. From Sister Mary McGlade, executed in 1942 to Lieutenant Colonel Charles Green who died of his wounds in 1950, from Lieutenant Stanley Reid of the Mounted Infantry who died in 1901 to Lance Corporal Shannon McAliney who was accidentally killed in 1993, from Private Tom Jones who was killed in action in 1917 to Lance Corporal John Hill who died of disease in 1943, the book is a compendium of names and faces, places and dates, memorialising those who have died during conflict or operational duties. The included photographs are incredibly moving, a mix of official shots (the soldiers so young) and casual moments caught candidly of attendees at the ceremonies (such honour and respect).

As I said, I began reading this book as research, but I continued because it is such a fascinating insight into how we commemorate those lost. Campbell has done a great job in putting together the facts, the memories, the individual stories, the photographs, the histories and the remembrances. The book is well-written and easy to read, and every page tells a new story. This book would make a wonderful gift for anyone with an interest in war history, Australia’s military service, or for anyone who has lost a relative or family member to a historical or to a more recent conflict. The back cover photograph is particularly stunning: the Eternal Flame burning constant in the Pool of Reflection in remembrance of the nation’s war dead.