The Man in the Water – David Burton 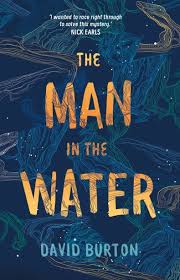 Author David Burton is well-known for his playwriting, his work with the Queensland Music Festival, and his award-winning non-fiction book for young people, How to Be Happy. His first novel, The Man in the Water (UQP 2019), is a page-turning and suspenseful YA story that combines a coming of age narrative with the mystery of a murder to be solved. The book opens with the line: ‘On the first day of Year 10, Shaun sees a dead body.’ A great opening, which leads us directly into the lives of the two main characters, Shaun and his best friend Will, 16-year-olds growing up in a quiet mining town in outback Queensland.

Shaun is alone at the town’s lake when he sees the dead body floating face-down. He can’t quite believe what he’s seen, and he immediately rushes to the police station to report what he’s found. But when the local constable drives Shaun back to the same spot, the body is gone. Completely disappeared. The cops think Shaun is making the whole thing up, perhaps in some sort of grief response to losing his own father a year earlier. His mother is so worried about his mental health that she arranges for him to see a psychologist. But Shaun knows what he saw, and along with Will, the only other person who believes him, they set out to investigate the incident themselves.

I powered through this novel. The teenage characters are well-drawn and the dialogue is whip-smart and spot-on. The plot races along as we, the readers, travel this journey with Shaun as he tries to uncover the truth. Aside from a couple of distracting points related to leads or clues inexplicably not followed up by the police, this is an engaging story that is the perfect holiday read for adolescents. Almost every chapter ends with a cliff-hanger that ensures you keep reading. Burton writes deftly around the issues of grief, family dysfunction, mental health and suicide, and his experience of working with young people affected by these issues has obviously informed his writing – the narrative is sensitive, thoughtful and insightful. Added to that is the intriguing plot and the idea of a young man determined to follow his nose and find out the truth, despite being disbelieved and mocked, and suffering a lack of self-esteem for various reasons. There is also the innocent and tentative blooming of a romantic interest, which is delivered with all the associated angst and self-doubt and trepidation that 16-year-olds suffer.

Burton’s depictions of the dynamics of relationships – between friends, between family members, between students and teachers – are all well-crafted and believable. And despite the subject matter, the book is very funny. Shaun and Will are endearing, clumsy, loveable teenage boys, and their laconic wit and dry sense of humour shine through on every page.

This is a murder mystery for teens, age-appropriate and yet filled with drama, high stakes (and hi-vis vests), and the everyday frustrations of being an adolescent with little autonomy in a life dictated by adults and their rules. But it’s also a story of one boy’s determination to believe in himself and uncover the truth.