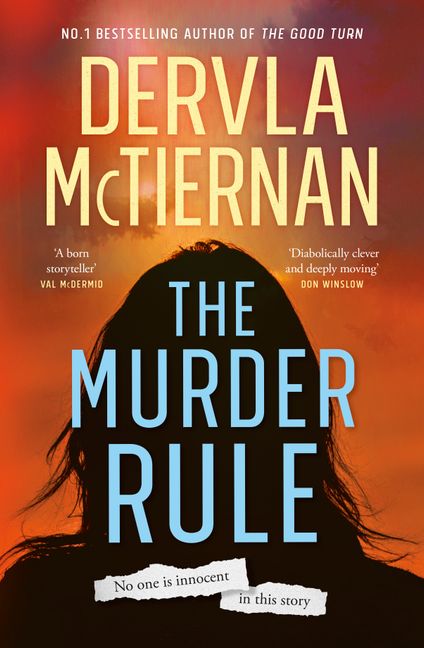 I’ve read and loved all three of Dervla McTiernan’s previous crime novels featuring Detective Cormac Reilly. Her new book The Murder Rule (Harper Collins 2022) is different in so many ways from her previous work – a standalone, it is set in the US and concerns The Innocence Project, a legal team working to prove the innocence of certain convicted killers. Passionate young law student Hannah Rokeby joins the team under the pretence of wanting to reform a brutal and unjust system. But there’s more to Hannah’s backstory than she lets on – her real reason for joining the Innocence Project is to sabotage one particular defendant, and she intends to do so using every avenue she can.

This is a great premise for a story – already we have a protagonist who is not who she says she is; a narrator who is hiding secrets from the other characters. But we also have diary extracts from Hannah’s mother, which reveal the real reason for her quest, and the story reveals a number of unexpected twists that turn the whole story upside down.

McTiernan is one of Australia’s best crime writers, especially her ability to make us care intensely about her characters. Her stories are complex and intricate, and her knowledge of legal procedures and court room drama authenticate the plot.

The US setting combined with the filmic plot makes this story very ‘Hollywood’ and I’m not sure I enjoyed that aspect as much as her previous books. That said, McTiernan is definitely now writing in the space occupied by Gillian Flynn and the like, and there is a huge market for this type of psychological thriller / unreliable narrator / epistolary novel. In fact, the book was named #1 bestselling New York Times thriller of the year 2022 so clearly it has ticked all the boxes for passionate crime readers! The first half of the book kept me reading but it was at a point just over halfway that I realised she had upended my perspective on several of the characters – a simple but clever manoeuvre that then made me question everything I had read up until that point, and hooked me firmly on to finding out what would happen next.

McTiernan’s strengths are authentic dialogue and superb characterisation, as well as an intriguing plot, and she demonstrates these skills again in The Murder Rule. And while I found a few points unlikely or semi-predictable, generally this is again a well-written and constructed crime story with realistic characters and some page-turning suspense, especially towards the last third of the book, where the action comes thick and fast (there’s even a great car chase! Once again, perfect for Hollywood.)

This book delves deep into themes of classism, prejudice and the accountability and fairness (or not) of the legal system, asking questions about who is targeted, and how; the resources devoted to one claimant over another, and the presumption of innocence (or guilt). If you are interested in the complexities of the legal system (particularly the US model, and its variations from state to state), this book provides well researched and compelling reading.