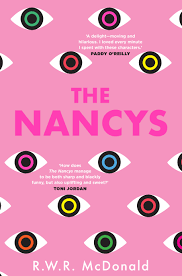 Who said you can’t judge a book by its cover? The cover of The Nancys (Allen and Unwin 2019) by R.W.R. McDonald is the embodiment of what’s inside: a fluoro-pink explosion of rainbows, glitter and unicorn eyes. Confusing? No matter how I try to explain this book, it won’t seem to make sense, and yet in the end, it REALLY WORKS.

It’s told from the point of view of 11-year-old Tippy Chan but it is definitely NOT a book for children! Tippy lives in a quiet town where nothing much ever happens and everybody knows everyone else’s business. The town is peopled with characters that are quirky and outlandish caricatures (think Schitt’s Creek…) Tippy’s dad has recently departed and her grief is at the centre of much of what happens in this story. Enter her Uncle Pike and his boyfriend Devon, who have come to town to babysit Tippy while her mum is on a two-week cruise. These characters are absolutely hilarious, over the top, outrageously camp, proudly gay, tender, self-deprecating and always poking fun at one another (and frequently at everyone around them). The VOICES of these three characters are unique, spectacular and memorable.

So, why The Nancys? (Besides the obvious. This novel is chock full of puns and plays on words). Tippy is obsessed with her uncle’s old Nancy Drew mystery novels and she SO wants to be 16. And to be Nancy Drew. And to solve mysteries.

Her chance arrives when her teacher’s body is found beside the only traffic light in town. She, Pike and Devon form The Nancys, a secret amateur detective club. The crime is gruesome and horrific but the light-heartedness and playfulness of this story elevate any unpleasantness to mere background for the genuine rip-roaring drama that unfolds. While the three main characters bond over the investigation (clues, red herrings, whiteboards, police, motives, opportunities, weapons) it quickly becomes obvious that something dangerous and dark is happening in the town. Can The Nancys uncover the truth before someone else gets hurt? (Oh, that’s right, somebody else IS already hurt – Tippy’s second-best friend, Todd, who’s fallen off a bridge. It was an accident … or WAS it??) Her BEST friend, Sam, is in cahoots with her most of the time, but is not in favour of her poking around a murder case. Tippy’s mother is mortified that her daughter is doing anything of the sort. Devon is mortified by the town’s very questionable fashion and home decor choices.

The dialogue in this novel is fantastic. So authentic you can practically hear the characters speaking. Occasionally Pike – or more likely Devon – says something SO outrageously risqué and lewd that you have to do a double-take and read the sentence again to make sure your eyes are not deceiving you. (WAIT, WHAT?? He said WHAT?!) And the dynamics between the characters are tender, moving, poignant and warm. This story manages to be both blackly funny as well as seriously shallow and light-hearted. It’s sharply observed, sarcastic, sardonic, satirical and witty. Suspend your disbelief and enjoy the ride.