The Octopus and I – Erin Hortle 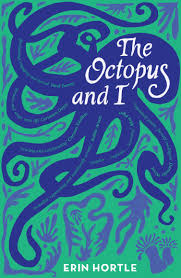 The Octopus and I (Allen and Unwin 2020), the debut novel by Erin Hortle, is an experimental meditation on illness, grief, loss and our interconnectedness with the natural world. In rich, lush description and lyrical writing, the story explores how we feel about our bodies, how we navigate our relationships, and the subtle undertow of communication between humans and nature. It raises ethical issues about body image, feminism, environmentalism, sustainability, fidelity and loyalty to memory.

Set in the wild and beautiful Tasman Peninsula, the book is immersed in the ocean or in life by the sea. Lucy and Jem are testing the tender new spots of their relationship now that Lucy is recovering from major surgery which has left her body scarred to the extent that it feels almost alien to herself. Appearance may only be skin-deep but they both realise that radical changes to your physical body can alter the way you see yourself and those you love. As Lucy recovers from both the surgery and a freak accident early in the novel, she feels fragile and unmoored. She kindles a friendship with two older women, Flo and Poppy, who have a remarkably pragmatic approach to fishing and hunting octopus for food, and she befriends Flo’s son, Harry. But as she is drawn deeper into the anthropomorphic world of the octopus, she feels the sense of herself and her body changing, indelibly marked by the stain of the animal’s ink.

The novel includes chapters narrated by various animals, including an octopus and a seal, which gives it an otherworldly, ethereal grace as we are privy to these creatures’ thoughts and feelings. As much of the book is based on fishing, either for food, for livelihood or for sport, this makes these sections even more poignant, as we comprehend the violent threat of our behaviour towards these animals, and their possible – unheard – response. The story examines those who would protect our fauna and our environment, and questions whether the ends always justifies the means, as well as those who choose to plunder for profit, for sport or for pleasure. A moral minefield of issues opens up.

The trauma at the end of this book is particularly intense, vivid and thought-provoking. And all the woven threads leading up to that conclusion – about being a woman, being an octopus, being human, being alive, being sentient – come together to say something profound about our relationship with the creatures around us.