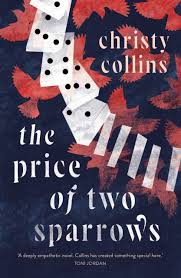 Christy Collins’ writing previously won a Seizure la Novella Prize, and her first novel The Price of Two Sparrows (Affirm Press 2021) confirms her place as an author to watch. Collins’ interest in race, religion, ethnicity, poverty, classism, exclusion and intolerance is explored through themes of belonging, friendship, ideals, family and dreams. The Price of Two Sparrows is a wonderful and accessible novel with an interesting plot that manages to ask much of the reader in terms of questioning their own beliefs and motivations.

In a coastal suburb, the Muslim community has pooled its resources to purchase a parcel of scrubby bushland on which to build their mosque, what they hope will be a home for them all, a place of worship and community, of belonging and prayer. They dream it will be so much better than meeting once a week at the local hall, where they must avoid the Meals on Wheels volunteers, where they are only one group of many who use the space. They yearn for a space of their own. Architects and planners are involved; the new mosque will be environmentally friendly and inclusive to all in the community, with childcare and other services. The design is flowing and functional, beautiful and simple, meant to align with religious values whilst also blending in with the surrounding bush and coastal dunes and harmonising with the landscape.

Heico works as an ornithologist fighting a losing battle to protect the local birds, always writing another grant proposal and trying to grab a piece of the ever-dwindling resource money available for such projects. When a journalist asks him for a comment on a ‘planned development’, Heico exaggerates his summary of the number of migratory birds that use or fly over the site, hoping to keep the land undeveloped. But then the mosque plan is revealed, and he finds himself embroiled in increasing community resistance to the project. He becomes the face against the mosque, even though he really has no problem with it, and his exaggerated figures backfire against him as he struggles to cling to his version of the truth.

His house cleaner, Nahla, is trying to establish herself in a new country and new marriage without English and without the sense of community she is used to; she is isolated and lonely and sees the mosque as a symbol of all she hopes to find: ‘community, familiarity, acceptance’.

Resistance to the project grows and the slow workings of local council and development laws grind away at a glacial pace. Nahla wants to speak up, but finds many obstacles to doing so, her lack of language being only one.

Quoting the Qur’an at chapter headings, this book is a fascinating mix of religion, environmentalism and racism. It explores culture, climate change, the long-term effects of human development on landscape, and the prejudice that people hold in their hearts even when they have no specific information on which to base their views.

Intermittently throughout the book, Collins includes a page of newspaper headlines from a particular month and year that relate to the time of the novel. These serve the purpose of anchoring the reader firmly in a time and place through the remembering of specific events, and also acts as a shorthand summary of Australia’s race relations and particular events, decisions, crimes, riots, laws and government pronouncements that have peppered our social landscape over the years, and driven many of the prejudices and intolerances that have occurred. We are drawn into the fictional by the inclusion of the factual. These interjections remind us of what actually occurred at those times; events we may have forgotten, or events that seem so much more significant now in hindsight than they did at the time.

At the heart of the book are the characters who we care deeply about from the beginning, no matter whose side we are on. And no matter what our views about development, about religion, about community, about environmentalism, the characters represent all of us, and enable us to see alternative points of view in an authentic and comprehensible way. Collins’ interest in issues such as race relations, refugees, assimilation, religious freedom, politics, climate change, the environment and the ponderous steps of government decisions and actions is obvious through her balanced and nuanced portrayal of a community divided, of families torn, of the rights of nature versus the desires of people. A lovely, thoughtful book that asks readers to question their own personal views, and how they might be tested.