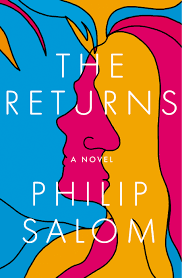 The Returns (Transit Lounge 2019) is the latest novel by author Philip Salom, an award-winning Australian poet whose novels have previously been shortlisted for the Miles Franklin and the Prime Minister’s Awards. In The Returns, we meet two middle-aged protagonists: Trevor, who runs a bookshop and is at the tail end of a disintegrating marriage; and Elizabeth, who posts a ‘room for rent’ notice in Trevor’s store and is somewhat surprised when Trevor himself answers the ad.

Trevor is keen to reignite the artistic career that he abandoned in his youth, and Elizabeth’s basement lodgings – with a huge backyard shed suitable for his painting pursuits – seems ideal. But his life is not as simple as it at first appears, with his complicated relationship with his not-quite estranged wife, and the fact that his Polish father disappeared when Trevor was only 15, declared dead. (But is he really?) Elizabeth is a freelance book editor, she suffers from prosopagnosia, or face blindness, rendering her unable to recognise familiar faces, and her constant companion is her dog, Gordon. She has also had a troubled past, growing up in a commune or cult with a mother more interested in sexual awakening than mothering; a mother who is now elderly and requiring care, and is a terrible hoarder to boot, her entire house filled with everything from newspapers to appliances to food, none of which she can throw away.

Elizabeth agrees to allow Trevor to lodge with her on ‘probation’, despite their friends and family thinking it a rather odd arrangement. And so these two eccentric characters, with their foibles and failings, are thrown together in a process in which they discover the small acts of kindness of which they are capable, and the importance of new friendships even – or maybe especially – in our later years.

Philip Salom depicts the interiority of his characters’ lives in detail and with insight, and although I found this book a little slow at times and had some difficulty maintaining my interest in Trevor and Elizabeth, both are endearing and quirky, and the book is nevertheless punctuated with humour, pathos and poignancy. The story attempts to say something about the nature of art (both visual and literary), the redemptive power of artistic talent, and the frequent pretentiousness of the artistic world. The Australian references – to place, pop culture, politics, art and news – are familiar and recognisable, and readers who enjoy deep-diving into the minutiae of people’s lives, thoughts, behaviour and motivations will appreciate the detail of this narrative. The themes of the book around the Australian literary environment reminded me a bit of Michelle de Kretser’s The Life to Come, and the story itself has echoes of Melanie Cheng’s recent Room for a Stranger.