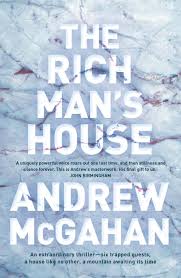 Andrew McGahan was one of Australia’s most talented writers and one of Queensland’s favourite sons. His death in 2019 at age 52 was a great loss to the literary community and to his legions of dedicated fans. His work was varied and always changing – from literary to crime, from science fiction to screenwriting to young adult fantasy. But all of his work is highly engaging and attempts to take the pulse of a nation at a particular time. His last great novel, The Rich Man’s House (Allen and Unwin 2019) was published posthumously to great acclaim.

I attended a Brisbane event where many authors and readers gathered to celebrate his achievements by reading from his work and sharing their memories of him. The winner of many, many awards, including the Miles Franklin, Andrew McGahan’s loss is still felt deeply by the writing community.

His last book, The Rich Man’s House, is a doorstopper at 596 pages but do not let this put you off. I found this novel compulsively readable, an absolutely nail-biting gothic horror thriller with tension and pace that does not let up for a single moment. This is a grand statement of a book; a compelling and highly engaging intellectual and psychological thriller with a fantastic cast of characters and McGahan’s trademark attention to the physical world and our connection with the land and the environment.

In this malevolent and disturbing narrative, nature itself confronts humankind with our treatment of the planet and our regard (or disregard) of its beauty, challenging our responsibilities and questioning our actions. As with many of his novels, The Rich Man’s House contains subtle echoes of McGahan’s respect and tribute to Indigenous people and their connection to country. But all of this philosophising is wrapped up in one hell of a story.

The premise is that in the freezing waters between Tasmania and the Antarctic, there exists an incredible natural phenomenon – a 25 000-metre high mountain rising up out of the ocean. First discovered by white explorers in 1642, the mountain has long been a world-wide object of curiosity, challenge and fear. Excursions to climb its base were of course attempted, but for many years nobody could get close to achieving the summit of 25 kms high. And then in 2016, at the foot of the mountain, a famous ex-climber (and the only person ever to have reached the summit of The Wheel, as it is known, years earlier), now billionaire, Walter Richman, builds his house (The Observatory) as a monument to climbing, to the mountain and to his own fame and fortune. With the help of a world-renowned team of architects, builders and designers, his dream gradually comes to fruition. The result is a palatial home etched into the very heart of the stone, a fantastical residence that is almost unbelievable in its ostentatiousness, its sweeping grandeur, its spare-no-expense profligate realisation of Richman’s fantasies.

Rita Gausse, the estranged daughter of the architect who designed the Observatory, is invited to the isolated mansion to commemorate the opening of the home and to meet the reclusive owner. Her father died unexpectedly during the final days of construction, and Rita is both surprised and curious as to Richman’s desire for her to be her father’s replacement at the gathering. And even from the start, something doesn’t feel quite right. Rita is distrustful of Richman and of those that work with him. His insistence – at great expense – to encourage her to come to the island is tainted with anxiety about what he might expect from her. Rita’s own troubled past involving a failed literary adventure and widespread disdain and reputational damage only add to the mystery.

When Rita, along with five other guests, become trapped in the mountain, cut off from all others, and strange and disturbing – even cataclysmic – events begin to occur, Rita is forced to confront her past, and to acknowledge that the unsettling and horrifying truth surrounding The Observatory is not only dangerous but may be fatal.

This book is gripping. The writing is superb, the plot unique and the themes confounding and thought-provoking. A powerful novel, roaring out into the void, demanding we rethink everything we thought we knew about money, fame, control, respect, environmentalism, magic, myth, legend, speculative fiction, history and the future.

Composed in an epistolary structure, the novel includes newspaper and media reports, academic papers, biographies, feature articles, historical records and more, dated from centuries before the opening scene to many years afterwards. In this way, McGahan constructs a highly believable and credible framework – certificates of authenticity from many and varied sources – upon which to hang his story. He subtly includes these ‘facts’ into his story, this entire parallel world that he has built, in which this mountain exists, and references to its history are coherent and true. And then he takes the reader on a journey that is nerve-wracking, sinister and frightening, but always totally believable. Even his forays into alternative thinking or slight magical realism are presented in such a way that we suspend our disbelief and simply roll with the flow of the story.

This is a truly great book – a fantasy, a history, a ghost story, a thriller, a literary masterpiece; one final gift from a truly great writer.