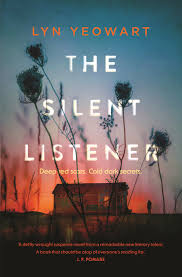 The Silent Listener (Penguin Random House 2021) by Lyn Yeowart is an accomplished rural literary psychological thriller that takes us backwards and forwards in time as mysterious events unfold and secrets, motivations and lies are revealed.

We meet Joy Henderson and her father George in 1983 as he lies on his deathbed. We are privy to 1942, when George and Gwen first meet and begin a romantic relationship that will become a troubled marriage. We see the interactions between 11-year-old Joy and her sister Ruth during their childhood in the 1960’s on the family farm and their later reactions to the death of their father. In this way of alternating chapters, from the perspective of the relationships between each of these pairs of two characters, the story gradually builds over two generations. About halfway through the book, we begin to also see chapters featuring Joy and Senior Constable Alex Shepherd, who is not only looking into George’s death but is also haunted by the disappearance years previously of local nine-year-old girl Wendy Boscombe, a cold case still unsolved.

The bereavement notices posted in the local paper by all manner of citizens indicate that George was well-liked and respected and will be sorely missed. But as the story unfolds, it is clear that the Henderson family has many secrets that were hidden deep within the family home. Joy and Ruth’s older brother Mark is one – he is absent from his father’s deathbed, but what could his reasons be?

George dies the day after he confesses to a terrible crime, and Joy finds him with a belt tightened around his neck. But even this is not all that it seems.

As the story develops, it becomes clear that at least one or more of the characters / narrators might be unreliable, either due to poor memory, or because they are being deliberately misleading. But who is it? And why? Where is the truth to be found?

The title comes from a wall hanging on the Henderson’s living room wall, (one I had in my own house growing up actually!); an embroidered piece of velvet with the words:

Christ is the Head of this House

The Unseen Guest at every meal

The Silent Listener to every conversation

And while the Henderson children endure the wrath of their abusive father (his constant lament to Joy is ‘you’re an ugly, filthy sinner … a lazy, good-for-nothing sinner …), she remains a silent listener to the goings-on in their house, planning for the day when she can leave and get her revenge. The physical and emotional scars of the characters mark them forever.

The web of lies and mistrust grows more tangled the more Shepherd investigates, and the decades-old cold case of Wendy Boscombe appears to tie everything together. If only he could find that first thread to pull, to begin the unravelling…

We empathise with the characters in this page-turning, psychological thriller with many surprises and twists and turns, right up until the last page. In fact the last few chapters are genuinely shocking but the author manages to leave us with a satisfying ending. Quite a remarkable debut.