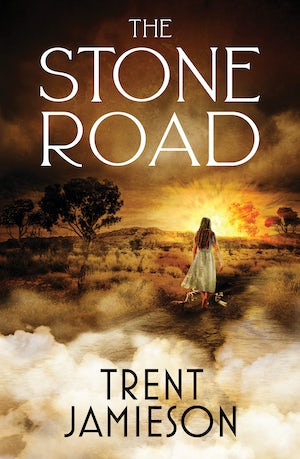 Whether fantasy is your go-to genre, or something new for you, you can be guaranteed that any novel by Trent Jamieson will be a fantastic tale with detailed world-building, complex characters and an intriguing story, no matter whether you are reading it because you love fantasy or merely because you love a great story. The Stone Road (Brio Books 2022) has enough reality to satisfy those who prefer realism, but also enough creeping dread and slightly weird alternate reality to attract fantasy lovers.

On the day twelve-year-old Jean was born, Furnace became alight and began calling townsfolk to it, and the dead howled loud enough that everyone in Casement Rise knew something dark was unfolding. On every birthday since, something malevolent or evil or unfortunate has happened, and the townsfolk learn to keep their distance. Jean’s nan is one in a long line of ancestors protecting their small village and up until now, she has been keen to protect Jean from knowing the extent of the danger. But in the year after her twelfth birthday, it becomes apparent that perhaps she has been overprotective. If Jean doesn’t have the experience or knowledge to face the demons, how will she ever do it on her own?

The Stone Road is written in absolutely beautiful, lyrical language that is grounded in reality and a possible dystopian future but is lifted with poetry, verse, luminously crafted sentences, and horror and fantasy themes. But despite the ever-present threat of monsters and evil creatures intent on harm, at its heart this is a story about the relationship between a girl and her grandmother (and the mother between them), about growing up and growing wiser, about friendships and loyalty and betrayal and sacrifice, about familial expectations and responsibilities, about childhood hopes and nightmares. It has trees that are weighed with history and talking birds. It features a time when the dead are not gone but lie beneath the earth waiting to communicate with the living. It is about defeating the monsters within as well as the monsters without.

My favourite relationship in this story is between Jean and the dead boy, who lies silently waiting for her to connect with him by touching her bare foot to the earth so he can speak.

Jamieson’s imagination is ferocious and unbridled and he truly writes fantasy genre that absolutely everyone can enjoy, because the themes he writes about are human, universal, realistic and full of emotional truth.