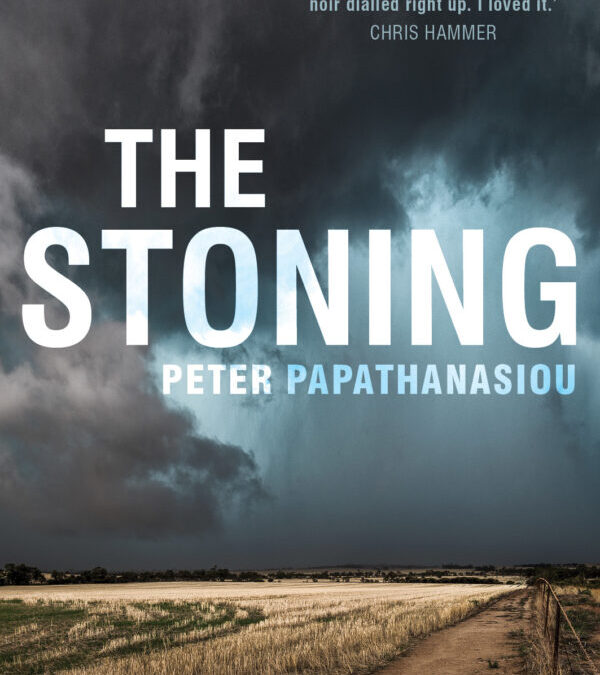 Yet another fantastic Australian outback rural crime noir novel debut for your holiday reading: The Stoning (Transit Lounge 2021) by Peter Papathanasiou. The first in a planned series (yay!), The Stoning features Detective Sergeant George Manolis, a richly captured policeman of Greek heritage who is summoned to the small outback town where he grew up to investigate a brutal murder.

Local loved schoolteacher, Molly Abbott, was discovered taped to a tree and cruelly stoned to death. So many aspects don’t add up – she was a well-liked member of the community so who would want her dead? The manner of death seems to point directly at ‘the brown house’, the immigration detention centre that has become the dying town’s main source of income; stoning is a notorious method of killing in some of the society’s most represented in the facility. And yet Molly was a staunch supporter of the asylum seekers and in fact spent her spare time teaching them English and helping them with their visa applications. The treatment of the refugees then comes under scrutiny, with cracks appearing in the supposedly state-of-the-art facility. Meanwhile, suspicion falls on others including widow Molly’s ex-lovers.

The dual narrative is that of the town itself – poor, derelict and failing – a very far cry from the home Manolis remembers from his childhood, when his father ran the local milk bar. The police force is a joke, managed by a frequently drunk, lazy and corrupt chief who turns a blind eye to most crimes, particularly if they involve crimes against the local Aboriginal population. The tiny station has one First Nations constable who is discriminated against for more than one reason, and another female constable who also suffers her fair share of prejudice. The town of Cobb is brimming with drugs, alcohol, violence, racism, intolerance, ignorance, corruption, secrets and lies.

This novel has all the great features of an excellent crime read: a nuanced and flawed cop protagonist with secrets and pain in his own past; an outback town with a complicated history and present-day cover-ups; a seemingly innocent victim; a cast of suspects (some of whom may be guilty of something, if not the crime itself); and lots of red herrings and genuine clues seeded throughout the story. And of course the setting is pure Australian noir. A small, rundown town that has seen better days and a more profitable time, now home to loners and old-timers and those without the wherewithal or the energy to leave. The sense of place is exquisitely rendered.

The Stoning is a gritty, sinister and compulsive page-turner. While it is part police procedural, it is also a damning depiction of a community under threat from within, with the dark shadows of historical racism and violence reaching forward to the present. Add to this the controversy of the treatment of refugees, and the story reaches a critical mass boiling point of conflict.

The ending is satisfying in several ways – firstly because after the climactic penultimate scene, the reader is still unsure of the fate of several of the characters (only revealed right at the end); secondly because there is still one final twist in the tale; and thirdly because the ending leaves us with the sense that Monolis is a character who has a long journey ahead of him, hopefully played out in the next book/s.