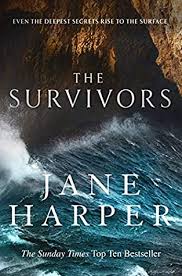 The release of author Jane Harper’s latest crime novel The Survivors (Pan Macmillan 2020) coincides with the imminent release of the film adaptation of her first novel, The Dry, starring Eric Bana. With two books in between (Forces of Nature and The Lost Man), Harper has quickly established herself as a new queen of crime fiction in Australia. Much like crime novelist Chris Hammer, Harper’s work is informed by her years of work as a journalist, and both their stories are full of clever and complicated narratives, scores of red herrings, a huge cast of characters that could be victims or witnesses or suspects, and small communities where secrets unearthed can cause huge repercussions for the locals.

Unlike Harper’s other books based primarily in the outback, The Survivors is set on a coastal town full of surfers and beachcombers in winter and tourists and travellers in summer. The main protagonist, Keiran Elliot, has left the area years before after a reckless accident led to devastating circumstances both for him, his family, and those he loved. He returns for a visit with the shadow of his brother Finn conspicuously absent in the background. When a body is discovered on the beach, secrets begin to emerge of what happened all those years ago, and how it might be connected to the young woman’s death of today.

The Survivors is trademark Harper. Although each of her books presents with entirely different characters and settings, the sense of the plot is similar, and the many characters also seem vaguely familiar.  They are struggling against an enemy – either seen or unseen, either from within their own demons or past regrets, or from without in the form of sinister and unsettling circumstances.

Anyone who loves the recent spate of rural noir Australian novels will enjoy this book. It didn’t resonate as much with me as The Dry or The Lost Man, but I’m sure her diehard fans (of which there are many!) will enjoy The Survivors, another standalone novel. As usual, Harper has nailed the landscape and environment in which the book is set, and the ocean, rocks, tides, waves, hidden caves and sweeping coastal sense of place feel authentic and well-researched. Also true to her form, the narrative has several different threads which feel disconnected at the beginning but which come together by the end, sometimes in surprising ways.

If you are lucky enough to still be on holidays, this will be a great beach read, and if you are a crime aficionado, you will not want to miss this latest creation from one of Australia’s most popular contemporary crime writers.