The Tattooist of Auschwitz – Heather Morris 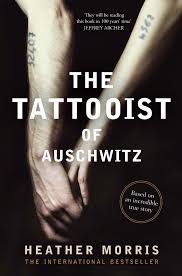 The very first words written in The Tattooist of Auschwitz (Echo 2018) by Heather Morris are these: ‘This is a work of fiction, based on the first-hand testimony of one Auschwitz survivor; it is not an authoritative record of the events of the Holocaust.’ I think it’s important to remember these words when critiquing a book that on the one hand is an international best-seller that has sold more than three million copies, and on the other hand has garnered criticism from institutions such as the Auschwitz Museum and Memorial, and from individual survivors of the Holocaust and their families. Rarely has a book so commercially successful also been so divisive.

To me, the book is a love story, the tale of Lale Sokolov, a charming Jewish man, who falls head over heels for Gita when they meet by chance in Auschwitz in 1942 as he is tattooing her identification number on her arm. If ever there was a romance destined to fail, you would think that desire blossoming in a WWII concentration camp would be the perfect setup for that failure. And I think that’s why it has been such a popular story: Lale and Gita, against the odds. And very high odds they are – starvation, deprivation, humiliation, all dignity and humanity stripped away.

So how justified are the criticisms levelled at this book? How much does it matter that Morris is not Jewish? How much can a book set in a real (and terrible) place, gleaned from the oral history of a survivor (Lale himself), rely on fiction to reimagine the past? Where do the blurred lines between fact and imagination intersect? How to defend Morris’ right to tell what she freely admits is a fictional story? How to respect the critics who feel that she has taken liberties and profited from a story that doesn’t belong to her?

Most of the criticism has been around ‘numerous errors’ in fact, along with ‘dangerous and disrespectful’ depictions of those held prisoner in Auschwitz and Birkenau. This is indeed a confronting, inspiring and moving love story between Lale and Gita, but the setting is unsettling; I find it difficult to believe that this rosy tale of undying love would have found the nutrients to survive the dusty earth of Auschwitz. It seems unbelievable. Implausible.

And yet, Morris spent three years interviewing Lale Sokolov for this project. His wife Gita had recently died, and apparently he wanted to record their story for prosperity [actually I meant to write posterity, but perhaps that was a Freudian slip…], so that he, too, could die and be with his beloved. The friendship between Morris and Solokov ‘… grew and Lale embarked on a journey of self-scrutiny, entrusting the innermost details of his life during the Holocaust to her.’ The book includes an afterword by the couple’s only child, Gary Solokov, who speaks of his parents with love, warmth and admiration. Morris talks of the waltz between memory and history, sometimes in step and sometimes straining to part; she says that ‘Lale’s memories were, on the whole, remarkably clear and precise. They matched my research into people, dates and places … [but that] … getting to know a person for whom such terrible facts had been a lived reality made them all the more horrific.’

And so we come to a reckoning: is this a fictional tale, based on an incredible true story, augmented with imagined details to enhance the story? Did Lale Solokov’s voice deserve to be heard, even if his own memory (or the author’s imagination) depicts a scenario that is different to the dominant narrative of the horror of the Holocaust, or because it deviates from other individual stories? I have no answer to these questions. I suspect that the relationship between Heather Morris and Lale Solokov deepened to one of mutual fondness and respect; that he trusted her with his story; that he told her everything he could remember; that he exaggerated the romantic camp liaisons with Gita because that was what saved them from a terrible fate; and that Morris has used literary licence to develop the story in a way that she felt was true to his wishes, consistent with her research, and comforting and inspirational for his family to read. Maybe all of these things can’t be simultaneously true.

I will say that while I cannot claim to have read numerous Holocaust books, this one is certainly the most light-hearted I’ve read, despite the circumstances. I think that Morris treads on dangerous ground by depicting Jewish people working with the SS in jobs such as being a tattooist, even though I have no doubt those jobs existed, and that put in the same situation, any of us might do anything just to survive, or to protect those we loved. But still … the levity of the story feels disingenuous to me. The horror of Auschwitz does not seem real.

Which brings us back to the initial point: this is a love story, and as a love story, it is a good one. It is about two people who find each other, and fall for each other, despite almost insurmountable odds, two people who develop a deep and abiding love for each other that is stronger than the hate they live amongst, stronger than all of the obstacles placed in their path, stronger than the machine of war. They survived. They survived together and went on to live a happy family life, although no doubt shadowed every day by the terrible memories of that time. And as I said at the start, Morris categorically states that this is fiction. In the end, it is up to the reader to decide how much belief to suspend, and how fully to embrace this story as a tale of two lovers, rather than as a story of the Holocaust.

(Postscript: After my interview with Heather Morris at Avid Reader last night, I received a very telling message this morning. To paraphrase, the sender asks: ‘I wonder who I would trust to tell my story, and if they wrote it, then whose story would it really be?’)