The Wife and the Widow – Christian White 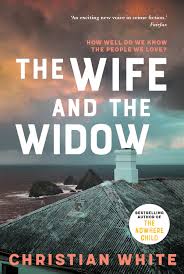 Christian White’s best-selling debut The Nowhere Child took the world by storm, and his second novel The Wife and the Widow (Affirm Press 2019) is another psychological crime thriller that will have readers on the edges of their seats. With engaging characters, an intriguing plot and an absolute KILLER twist, The Wife and the Widow ticks all the right boxes for a fascinating crime read and is sure to have book clubs around the country deep in discussion.

The story is set on Belport Island, a small community busy with tourists for three months of the year, but mostly empty for the remaining nine months. During the long winter season, the local residents survive on the smell of an oily rag, caretaking the shuttered holiday houses of the rich people from the mainland. This small, closed community is the perfect setting for a mysterious crime. The narrative is told from two perspectives. Kate is recently widowed, distraught by grief and by what she learns after her husband’s death about the double life he had hidden from her. Abby, an island local, is distressed when she discovers evidence that her husband may be a murderer. Both women independently set out to discover the truth, but in this shape-shifting novel, the trail of deception runs deep and nothing is quite what it seems.

To say much more would be a spoiler, but this is an unsettling read that will keep you guessing all the way through…until a certain point when everything will be turned on its head, you will wonder how you could have been so blind, and you will find yourself madly scrabbling back through the pages to see the clues you’ve missed. The Wife and the Widow offers a really clever and unexpected twist, supported by fleshed-out characters and a fast-paced plot.