There Was Still Love – Favel Parrett 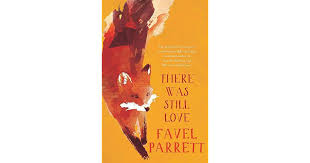 Favel Parrett’s much anticipated third novel There Was Still Love (Hachette 2019) is a slim, literary exploration of family, memory, sacrifice and culture. Informed by her autobiographical knowledge of her own grandparents and their stories, and her recollections of their lives, the novel is nevertheless a fictional tale of a country divided and a family divided, told from the perspectives of two of the grandchildren, Ludek and Mala.

The story timeslips from 1980 to 1938, from 1968 to 1942, from 1978 to 1981 to 1921. But it mostly takes place in 1980, in both Prague and Melbourne. Ludek lives in Czechoslovakia with his Babi (grandma), young and free despite the relative poverty of their communist regime. Mala lives in Australia with her grandparents, young and perhaps more free, although always considered the outsiders, the ‘wogs’; always pining for the home country. The two grandmothers, Mana and Eva, were separated as children, one remaining to face life in Prague, one migrating to the other side of the world to build a new life. Each feels disappointed and unsupported in their fate. Neither wants the life they left, but nor do they truly embrace the life they have. Their stories are told from the points of view of the grandchildren, who have grown up knowing nothing else, and who struggle to understand the complexities of their family history.

This novel is full of half-remembered incidents from the author’s own life, combined with fictional imaginings of the lives of her ancestors, braided together to create a whimsical meditation on love and loss, on the ties of family, on the sense of belonging and on the place we call Home. It is filled with smells and sounds and tastes, with food and snow and games and cooking. It is a story of survival – the survival of being a stranger in a new country, and the survival of staying put to cope with the difficulties of familiarity.

Parrett’s language is rich, immersive, evocative and lush; it is simple and spare, poetic and rhythmic. Myths, legends, superstitions, family lore, cultural customs – all come together in a beautiful rendering of how love prevails, despite everything.