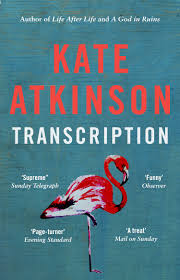 Author Kate Atkinson is a highly skilled craftsperson of words, plot and especially character. In her novel Transcription (a stand-alone by Doubleday 2018), she inserts us into 1940 when 18-year-old Juliet Armstrong is recruited – almost by accident, and certainly reluctantly – into the mysterious world of espionage.

She is appointed the almost mundane task of transcribing secretly taped conversations between MI5 operatives and a group of British Fascist sympathisers. The work is often tedious and banal, with the occasional spark of exciting intrigue.

Ten years later, Juliet is working as a producer at the BBC, having left the world of spies and subterfuge behind her. But when a mysterious figure appears from her past, she realises that she can never leave behind the life she once led. As the story unfolds, we become aware of a traumatic event that has forever changed her, and we begin to see her circumstances in a new light.

This book is witty, empathetic and engaging. Atkinson particularly captures the distinct voices of each of her characters in a wholly authentic way – Juliet is droll, naïve and vulnerable, and our insight into her thoughts provides some especially funny scenarios. But this is also a novel where a lot happens, and about halfway through the book, the reader realises that perhaps all is not what we had at first assumed. The ending is not at all what could be anticipated from the beginning.

The novel jumps backwards and forwards in time between 1940 and 1950, with a rather poignant prologue and epilogue both set in 1981. The narrative is informed by extensive research into the wartime and post-war espionage activities of Britain, from the double agents to the handlers to the operatives, and includes many of Juliet’s transcripts, which add a definite authenticity to the story.

While I perhaps wouldn’t elevate this book to the same brilliant heights as Life After Life, or A God in Ruins, which were experimental in structure and timeline, Transcription is nevertheless an accomplished novel which provides compelling characters and a fascinating insight into the shadowy world of espionage.