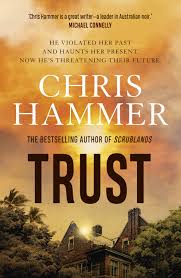 Mention Australian crime noir and the name Chris Hammer comes to the fore. His best-seller debut novel Scrublands and the sequel Silver have sold more than 285 000 copies internationally. Fans have been waiting patiently for the third book in the series, Trust (Allen and Unwin 2020), and will not be disappointed.

Hammer has again created a fast-paced, tense, action-packed thriller, with a complexity of background and character that is reminiscent of the popular Stieg Larsson’s Girl With the Dragon Tattoo series. As with those books, Hammer’s plots are complicated entanglements of political corruption, media controversy, nepotism, secret societies, the force of the rich and powerful and privileged, and police incompetence or outright bribery and fraud. The landscape into which Hammer parachutes his readers is impressively broad and yet he holds our interest with the microscopic clarity with which he presents his main characters.

Trust again features journalist and author Martin Scarsdale, who in the previous two books became caught up in horrific events which threatened to engulf him, and which opened up the wounds of his past trauma. This third novel focuses equally on Mandalay Blonde, or Mandy, his partner. In the first book, I thought she was a fleeting figure, but throughout Silver, she became more important, and now, in Trust, much of the story is actually related to her own backstory and history. This is revealed naturally and organically. We are surprised by what we gradually uncover about Mandy (as is Martin) but it all seems perfectly credible, and we understand why we haven’t known these things about her before now. Like crime author Dervla McTiernan, Hammer does an excellent job of drawing our attention to another main character and shining the spotlight on them while still keeping the protagonist – Martin Scarsdale – front and centre of events.

The book opens with a benign prologue with a shocking ending, that seems unrelated until we get further into the story. But once we realise its importance, we go back to it again and again to visit its relevance. Early in the story (second chapter), the pace quickens as Mandy finds herself drugged and kidnapped, and realises that ‘it’s the past, come to claim her’. And indeed, this narrative is all about the past, and how our actions inevitably catch up with us, no matter how determined we are to wallpaper over them, cover them up, and replace them with happier and more innocuous versions of our lives. Martin is alerted to Mandy’s predicament by a single voicemail – a scream, and when he races home, he finds an unconscious man on the floor and Mandy missing. As he begins to investigate what has happened, why, and who is involved, Mandy’s past crawls from the shadows, and leads him to a case possibly bigger and more influential than any he has been involved in before. The intrigue increases and the danger rises as the full extent of what he has uncovered, and what he is up against, becomes obvious.

In true Hammer style, these revelations are gradual and insidious, and even until the last pages, we are still trying to piece together the many clues and bits of evidence that he has carefully seeded throughout the book. And just when you think you understand everything that’s going on, another secret is revealed, another motivation is exposed, and another unexpected crime is uncovered.

Scrublands exploded onto the international crime scene, and Silver shored up Hammer’s reputation. This book, Trust, cements that reputation and builds on it. Hammer has an extraordinary grasp of the big picture structure of his stories, and as each book has featured many of the same characters and the same settings, the series as a whole only becomes more and more compelling. We know these characters now, as if they are friends (or enemies). We can clearly picture the towns, the environment and the landscape. We can see ourselves there, amongst the characters we know.

If you haven’t yet had the pleasure of reading Hammer’s work, I highly recommend you begin with Scrublands and then progress to Silver and Trust. Although each can be read as a standalone, much of the enjoyment of this series comes from the complex world-building and the layer upon layer of familiarity that he expands on with each book.

The title, ‘Trust’, becomes more and more appropriate as the story unfolds, this related to many of the characters, but particularly to Martin and Mandy, who may finally have found the deep trust and acceptance they have both yearned for and sought. I look forward to where Martin might go next.